Seven Wonders of Russia and Where to Find Them

For ten years, Russia has had an official list of its seven wonders. In 2007, Izvestia, Mayak Radio, and Rossiya TV started a truly one-of-a-kind project they named Seven Wonders of Russia. This was a multi-stage poll free for every Russian resident to vote in. Summer 2008, the initial 49-sight list was cut down to the final seven. Unlike the global seven wonders, which are all architectural, the Russian top sights are mainly natural. So let’s find out what gorgeous places Russia has to offer and how to get there!

What would even be the point of such rankings if Baikal didn’t top it? Lake Baikal is ever one of the world’s most unique natural sights, a symbol of Russia. It’s actually a UNESCO World Heritage Site, too. Every year, its coastline welcomes some 1.5 million tourists, mostly Russian. Foreigners only account for 16% of Baikal’s guests. 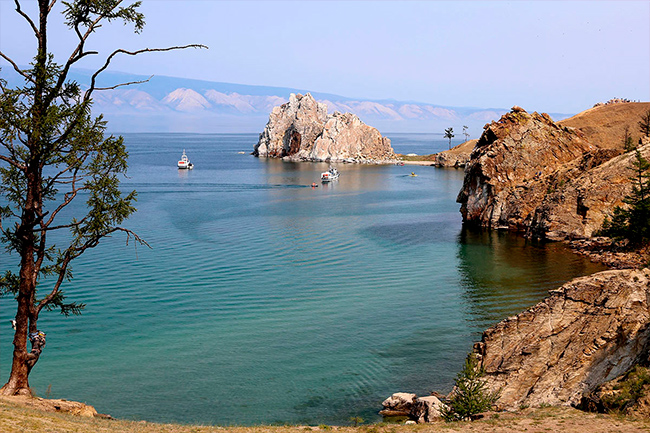 A Baikal trip is something you definitely have to experience at least once! Why?

Are you ready for the miracle of kayaking and hiking at Lake Baikal? For the unforgettable experience of walking its points of interest? For the satiating sensation of swimming its waters? Join our exclusive Baikal Active program today. Those who prefer ethnography are welcome to join our Three Religions of Baikal journey.

Kamchatka is not just one of the seven wonders of Russia, it’s also on the UNESCO World Heritage list — a well-deserved rank! However, it only welcomes some 200k tourists a year, as people are hesitant to travel that far. Foreigners make for just a tenth of that traffic. Yet the annual growth rate is terrific! So take your time to go to Kamchatka before it becomes mainstream.

Note that only a small and specially protected part of the peninsula, the Valley of Geysers, is actually on the seven-wonder list. This is the world’s largest geyser field, and it contains over a hundred hot springs in additional a few dozens large geysers. The place is not an easy-to-reach destination, as it’s only a helicopter that will take you there, and that’s not to mention legal restrictions on tourist traffic that require a special entry permit. However, the unique natural sights of the Valley make it all worthwhile! 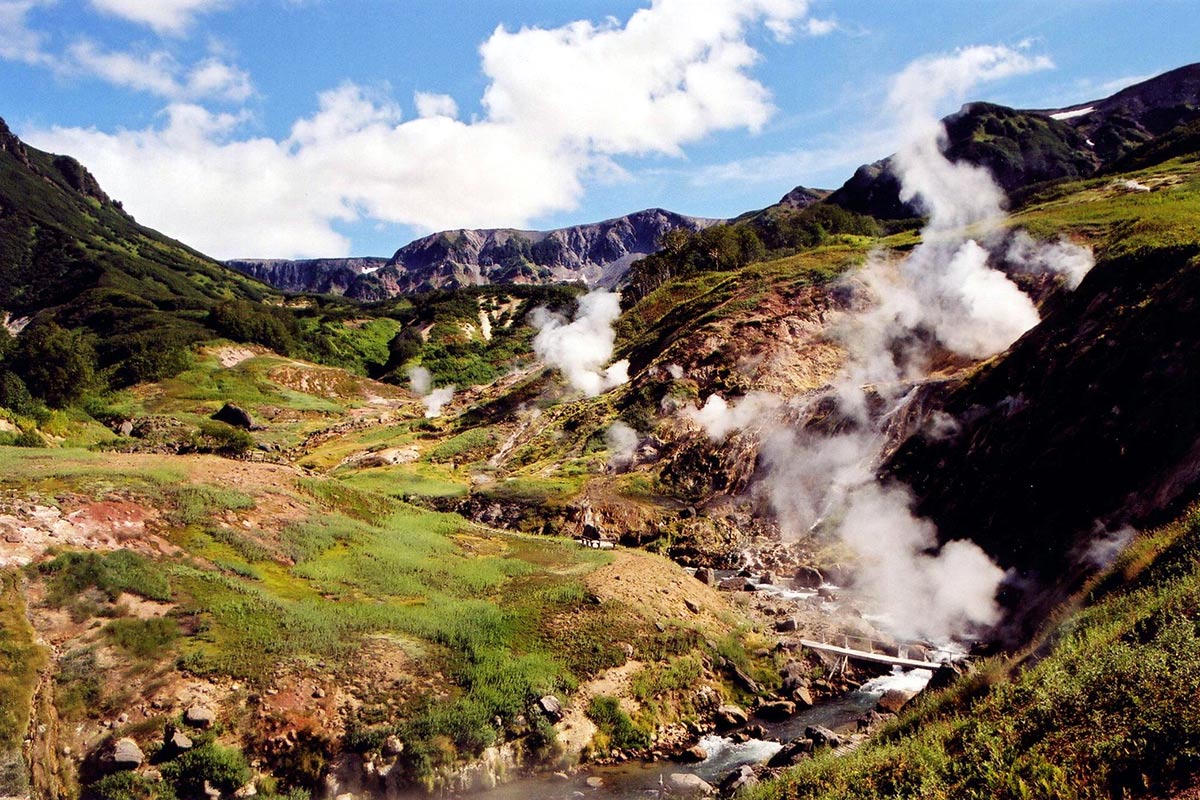 Is there anything else on Kamchatka though? Yes there is! Walking the region’s top volcanoes, their craters, and lava fields is an exclusive experience, and so is traversing the Pacific coast, like what you do as part of our Bucket List Journey to Kamchatka. Besides, Kamchatka is one of Russia’s top places for ecotourism! Watch the salmon coursing the rivers and bears fishing it, dip into the thermal springs, and marvel at the marine fauna. All these miracles of ecotourism are available as part of our 7 Treasures of the Bear State tour. 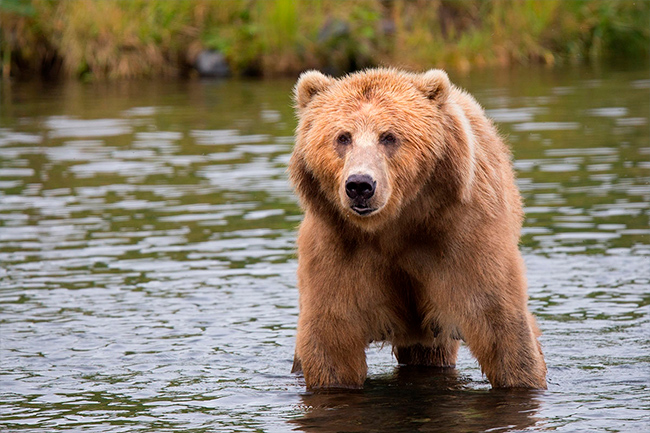 Elbrus is ranked one of Russia’s top seven wonders for a reason. One-of-a-kind nature, outstanding ski resorts, and on top of that, Europe’s highest peak! It’s also one of the Seven Peaks of the World, a list comprising the highest mountains one a continent. That’s why Elbrus attracts so many mountaineers and ski tourists from all over the world. Each year, some two thousand mountaineering groups reach out for the peak. 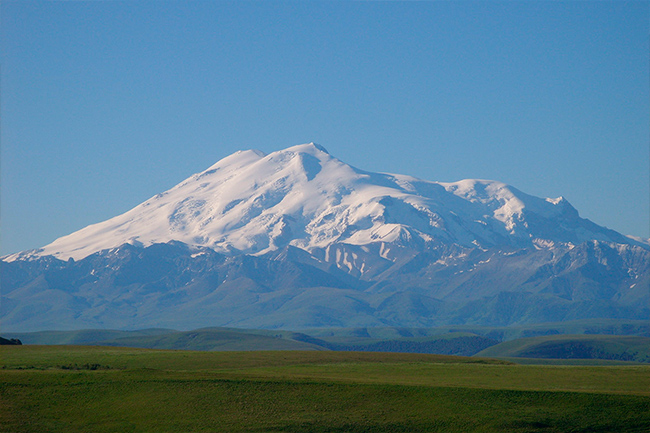 Climbing Elbrus is actually not that much of a challenge: even a novice may well try to do that. Mountaineering 101 will suffice. Using the equipment is a skill you can acquire on the spot. However, don’t get it wrong: climbing a good 5,642 meters does take physical prowess. Don’t ignore acclimatization and routing issues either.

Wanna conquer this world-famous peak? For novice climbers, we have the Above the Clouds tour that involves gradual acclimatization and on-the-spot mountaineering training. Besides, this tour only takes place when it’s warm, and the route follows the southern slope, the easiest one for climbing. 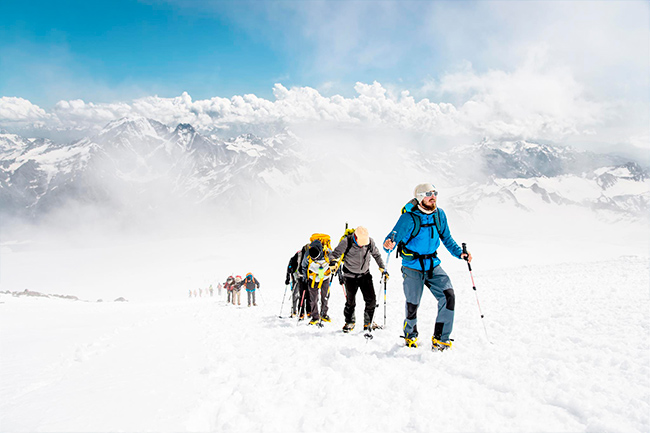 Komi Republic’s contribution to the Seven Wonders of Russia is its natural rock formations. The geological monument is located in Northern Urals and sits upon a plateau that’s mysteriously named Manpupuner. The word means “small mount of idols” in Mansi. The locals believe the seven idols towering above the plateau are rogues turned stone. That’s why the locals hold the place sacred. 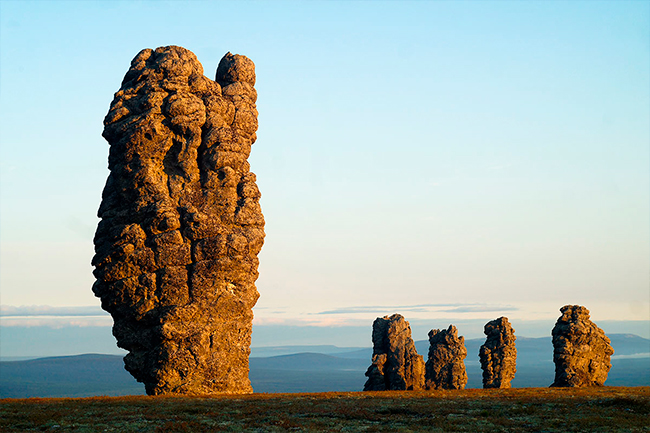 Despite the sight being both a Wonder of Russia and a UNESCO World Heritage Site, the attendance here is surprisingly low: less than a thousand tourists a year. Logistics is the culprit. Manpupuner is located in the hardest-to-reach part of the Pechora-Ilych Reserve. In summer, only a helicopter can take you hear.

In winter, you can snowmobile. Some daredevils even try skiing there! Well, unless you are really skilled at skiing, we recommend something more comfortable for transport. Bear in mind this is a natural reserve that requires entry permit—and permits are only issuable to groups, not to individuals. Group tours can be organized by the Reserve’s administration or by accredited travel agencies. 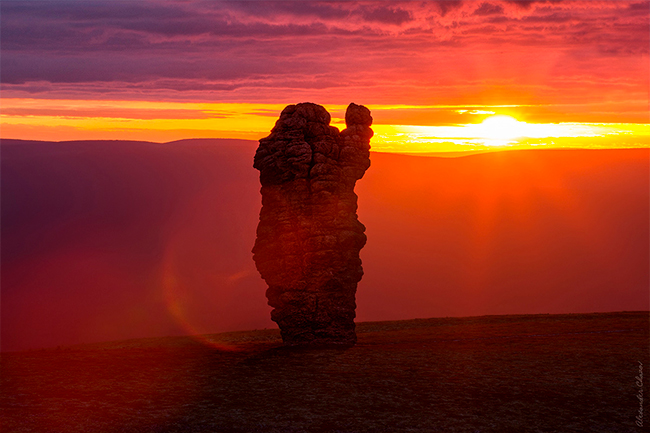 Mamayev Kurgan and the Motherland Calls

Now is high time we talk more about man-made monuments! Interestingly, they are all in European Russia, or rather in the Russian Plain. Of course, the #1 monument here is the Russia’s and Europe’s largest monument: the Motherland Calls on top of Mamayev Kurgan in Volgograd. For 22 years after its inauguration in 1967, it held the record as the world’s tallest statue, as witnessed by the Guinness Book of Records.

The statue is 85 meters high, with 50 meters toe-to-head and 20 meters of extra height from the hand. The sword the Motherland has raised above her head is 33 meters long and weights 14 tons. The entire sculpture weights some 8 thousand tons. The 16 meters high pedestal was a necessity to keep it stable! It’s only two meters of the pedestal you can see above the ground, as the rest is buried deeper. 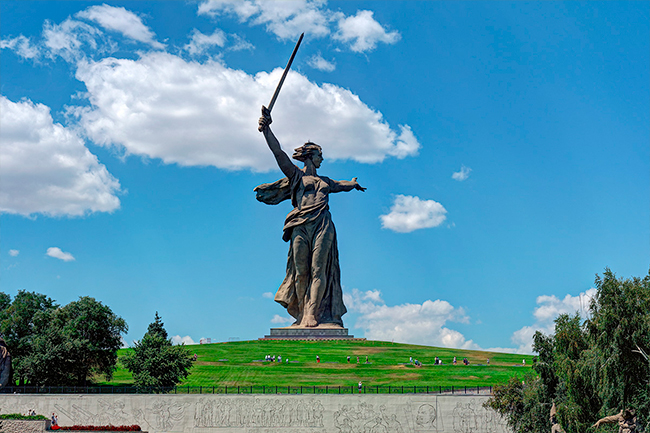 No-one knows for sure who the statue was modeled after. Perhaps, sculptor Yevgeny Vuchetich was inspired by Nike the Winged or by the Marseillaise of the Parisian Arc de Triomphe. Rumor has it the model was Nina Dumbadze, a Soviet discus thrower. Now, it’s actually very easy to see the Motherland yourself: just go to Volgograd!

St. Basil’s Cathedral is, along with the Kremlin, one of Moscow’s most recognizable landmarks. It is also a UNESCO World Heritage Site. It’s no surprise then the structure is one of Russia’s Wonders. Although St. Basil’s Cathedral is merely a colloquial term for what is officially known as the Cathedral of the Intercession of the Most Holy Theotokos on the Moat. Now it’s part of the State Historical Museum.

Construction began in 1555 during the reign of Ivan the Terrible. Back then, the intention behind constructing a church was to commemorate your victories and successful military campaigns. That’s where the Cathedral came from, too. Ivan the Terrible ordered constructing a new church after he successfully annexed the Kazan Khanate to Russia. The church would later undergo innumerable reconstruction projects. Today, it comprises eleven churches (annexes) named after Orthodox saints. Curious to find more about the history of one of Russia’s top monuments? Just take a tour there! 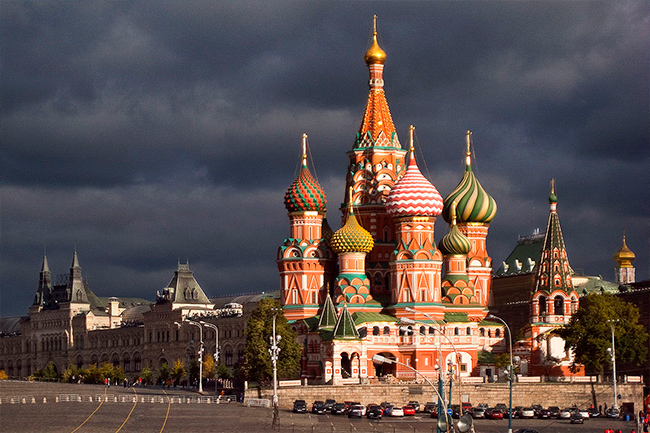 A project like Seven Wonders of Russia couldn’t but cover the country’s second capital, St. Petersburg. It contributed its Peterhof, an architecture and landscape site, to the wonderlist. Peterhof is, too, a UNESCO World Heritage Site. But what makes it world-famous is not just the palaces and parks, but the outstandingly huge network of 147 running fountains.

Construction began in 1712 upon Peter the Great’s decree; the Emperor dreamed of a summer residence that would outmatch the beauty, splendor, and pomp of Versailles! It took centuries to finish and renovate the place, adding more parks, structures, and fountains every time. During the Siege of Leningrad, the complex was occupied by the Germans, which nearly destroyed it. Post-war restorations are still in progress! 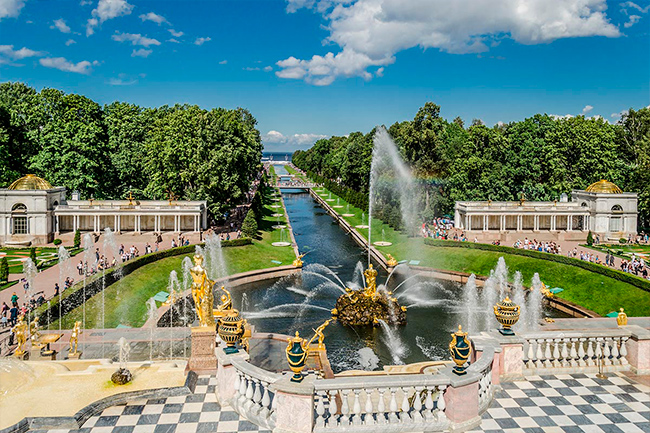 The Lower Park with its fountain cascades is perhaps the best-known part of the place. Here you’ll find the Samson Tearing the Lion’s Jaws, a few popular fizgig fountains, and a sea canal that goes from the Great Peterhof Palace to the Gulf of Finland. Five million tourists come here every year! This is Russia’s second most popular tourist destination after the Moscow Kremlin and the Red Square.

Russia’s natural sights are available under our tours: see what we offer for you to go to Kamchatka, Baikal, and the Caucasus. For more info, call +7 (495) 104-64-36 or email us at go@russiadiscovery.ru.