Our executive director Yulia Grigorieva has visited one of the most amazing places on the planet — Wrangel Island. In this article Yulia shares her experience and describes what is waiting for you on the cruise to the very edge of Russia:

"Chukotka and the Wrangel Island Reserve are the territory of completely different human values. The world of animals, where a man is a guest, not a host. It is difficult to imagine that such places still exist on our planet. I was lucky enough to see one of them with my own eyes. 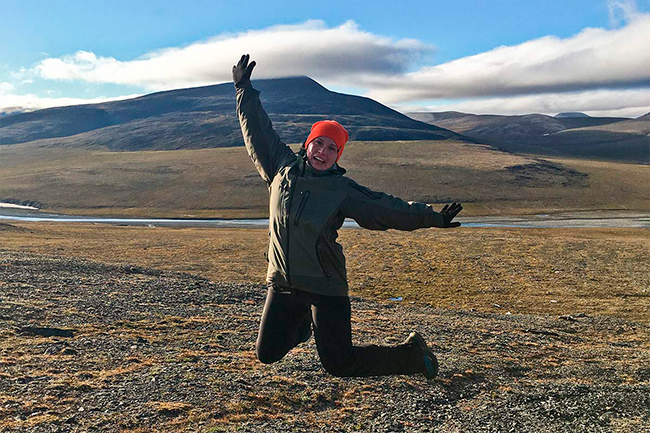 There are two ways to get to the northernmost island nature reserve in our country: by sea or by air. Every year in August, 2-3 sea expeditions to Wrangel Island are organized, and no more than 4 groups of tourists can get there by helicopter during the season.

In both cases, the journey begins in the capital of Chukotka — Anadyr. The flight from Moscow to Anadyr takes about 9 hours, so you cross almost all time zones of our large country. My journey to Wrangel Island began in the port of Anadyr with boarding the cruise ship "Professor Khromov". 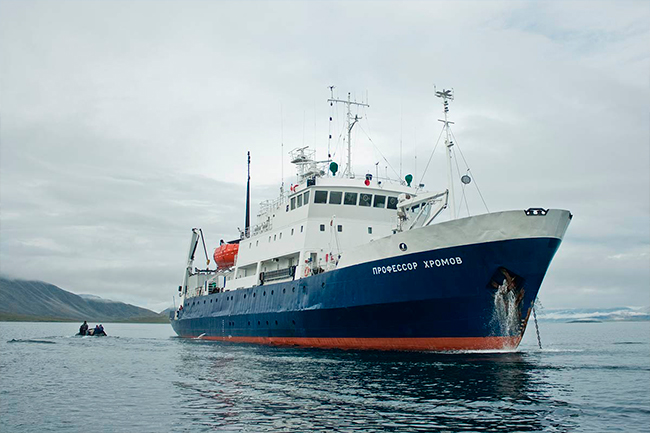 There are two types of activities during the sea expedition: cruising on Zodiac boats and landing ashore for sightseeing. Birds were the first for observation and photographing. The horned and tufted puffins, kittiwakes, glaucous gulls, guillemots and many others birds were nesting on the rocks over the water and were bustling around, chirping and shouting in different manner. Here you understand the true meaning of the phrase "bird colony". Kolyuchin Island is one of the best landings for bird watching in these places, and it is also interesting to wander around an abandoned weather station here. 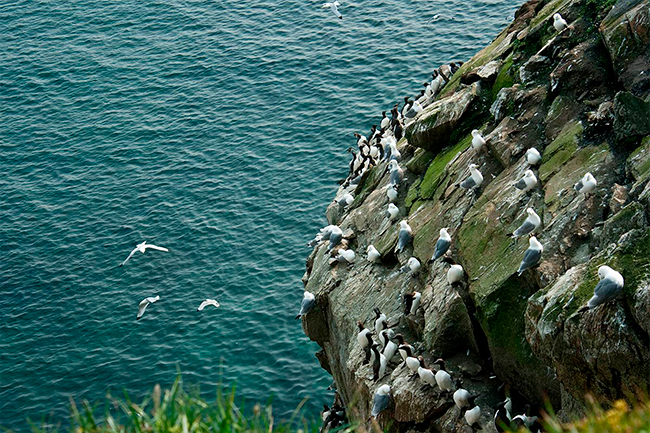 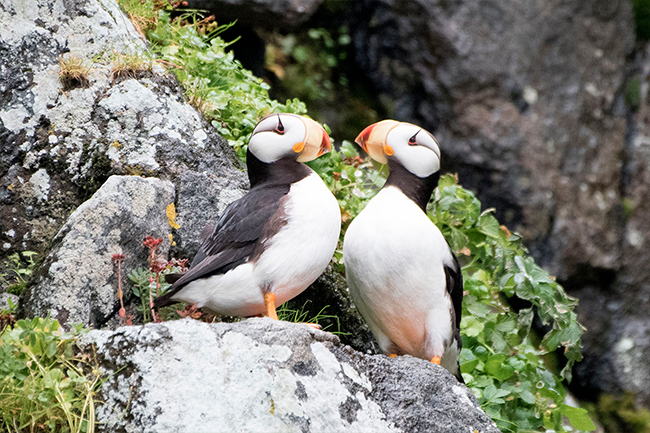 The first meeting with whales is like the first love, only better! No disappointments, just endless happiness. It seems that you can admire their dives into the ocean with such a brilliant elegance forever. I have not seen a single person who would remain indifferent to this spectacle. 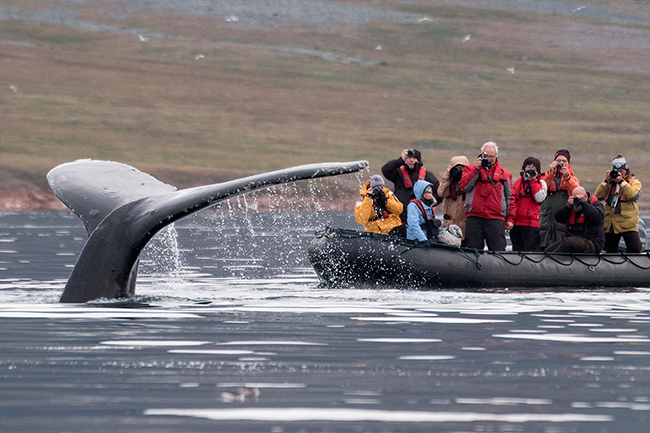 Another typical inhabitants of the Arctic are walruses. Curious, surprisingly fast animals that smell like sour cabbage. Timid and cautious, they hurry to hide under the water, when we appear. 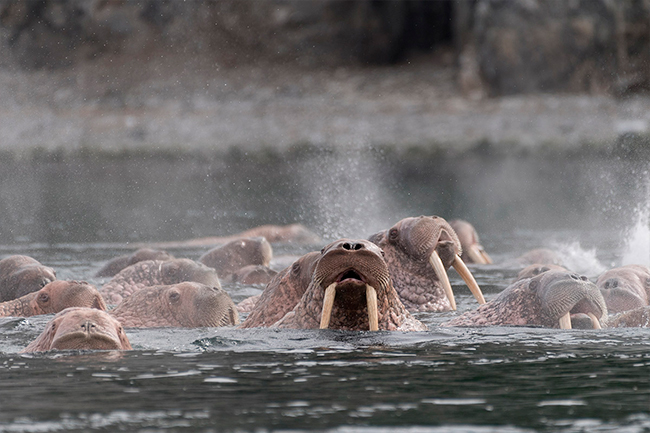 In addition to the wildlife observation, we’ve enjoyed meeting interesting people. We have visited the Chukchi settlement located near Yttygran Island famous for its Whale Bone Alley and got acquainted with the head of a large Chukotka family with an ordinary Russian name — Ivan Vasilyevich. It turned out that some 50 years ago, newborn Chukchi only had a name. As for surname and patronymic, my interlocutor got it only at school age. At the same time, his Chukchi name given at birth became a surname. Unfortunately, I have forgotten how it sounds, something like Tantanai. 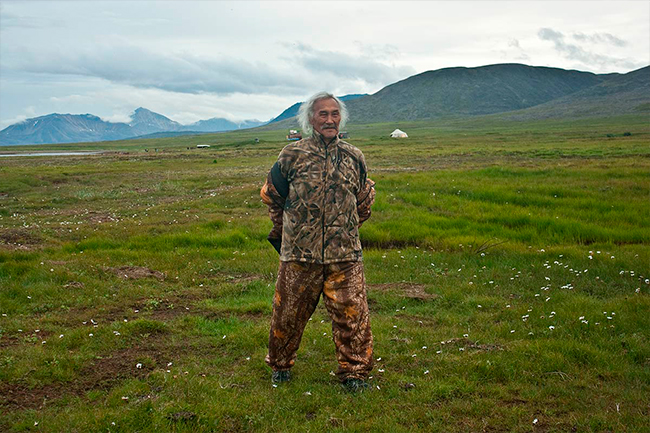 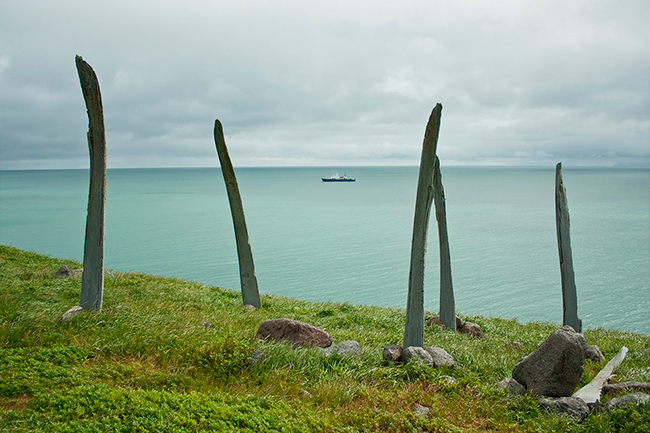 The village of Lavrentia impressed us with the mixture of pagan and Orthodox symbols, a local history museum, which we found quite nice, a whale meat treat as well as incredibly high prices. There has been something like an extemporaneous fair in the center of the village, where we were treated with all possible kinds of whale meat: fried, boiled, pickled, chops, etc. We have also managed to taste the famous Chukchi speciality called “mantak” (the skin and fat of a whale). 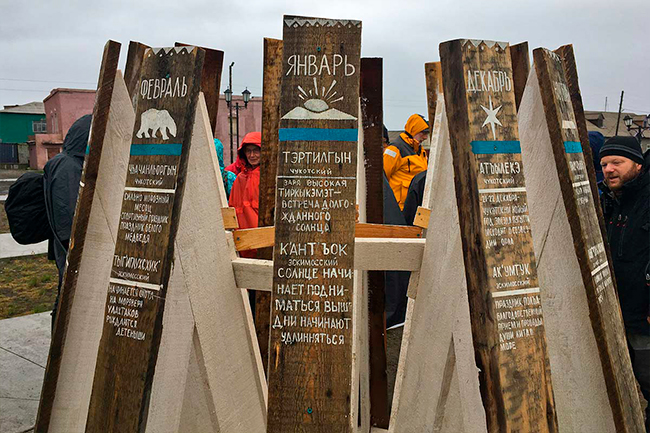 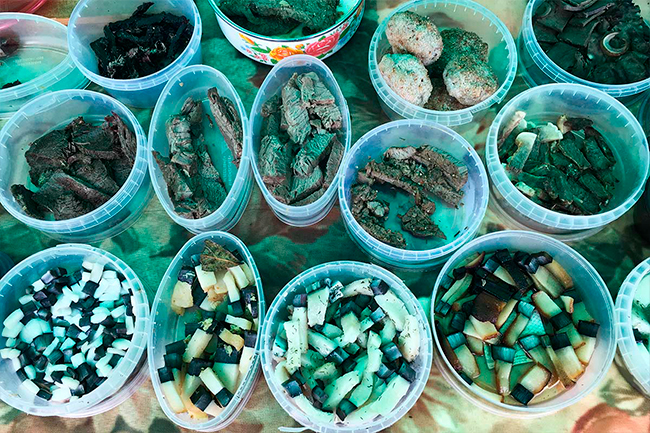 After 5 days of traveling along the coast of Chukotka, "Professor Khromov" reached the main goal of the cruise. Our first landing on Wrangel Island took place in a bay with the symbolic name Somnitelnaya (Russian for “Doubtful”). In the middle of the 18th century, Mikhail Lomonosov suggested that there was an island north of the Chukotka coast, which he nominally called “Doubtful”. Indeed, the land close to the location indicated by Lomonosov was later discovered, but it was named differently, in honor of the Russian Navigator Ferdinand Wrangel. But the name of the Bay has remained as “Doubtful”. 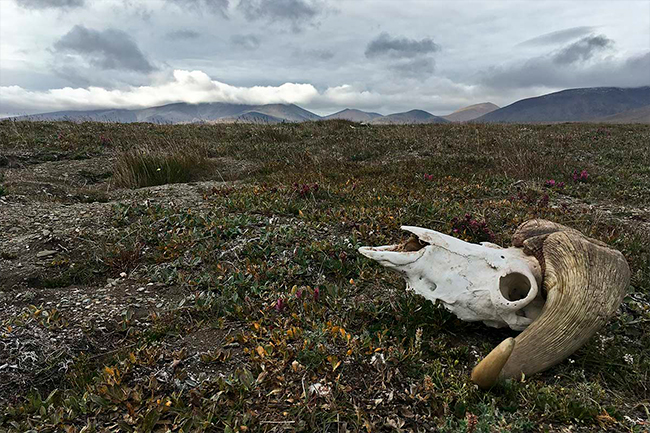 A unique place on the island is the 180th meridian. This is an iconic point that separates the Eastern and Western parts of the world. It is a completely indescribable feeling having one of your foot on the Eastern and the other one on the Western hemisphere. It is similar to a trip around the world at the North Pole, when you cross all the meridians of the Earth in a couple of minutes. 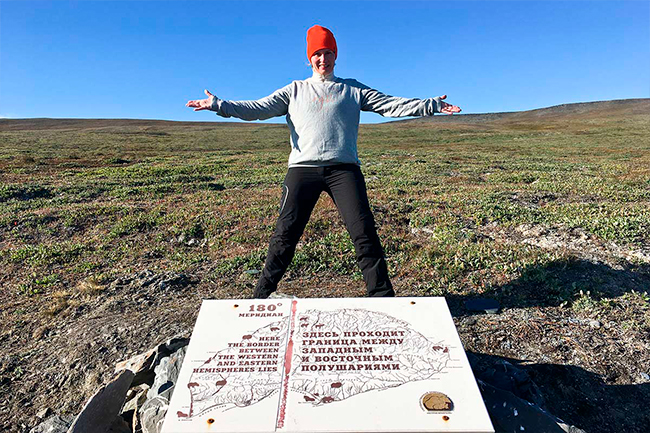 Wrangel Island is home to several hundred thousand snow geese — these are beautiful endemic bird species that attract ornithologists from all over the world. In the heart of the island you can meet musk oxen, which were imported from the United States in the late 70s and perfectly accustomed here. And, of course, the island is famous for being the polar bear maternity ward. Every year in winter, several hundred bears come to Wrangel Island to breed. In summer, the growing up cubs accompanied by mother bears can be observed in different places, including the coast. 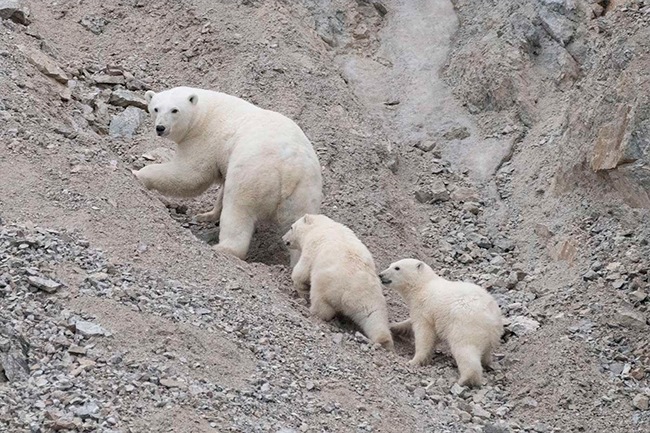 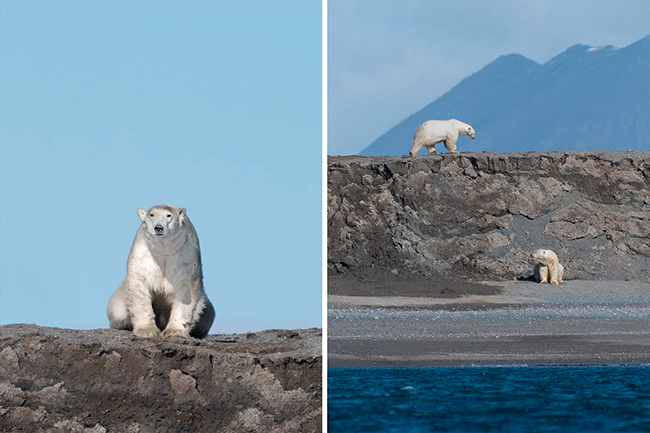 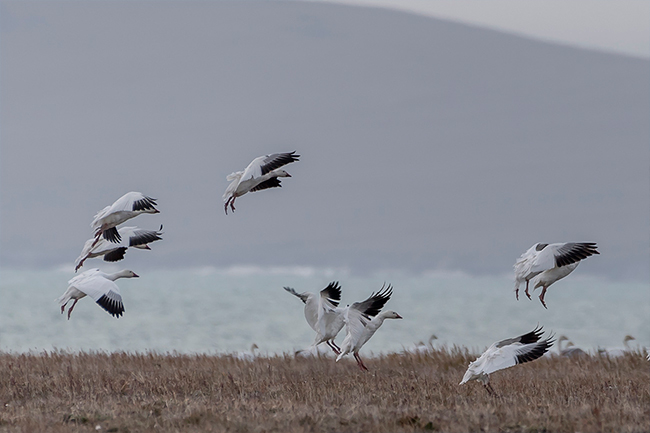 Our ship has rounded the island and we set off for our way back. We have visited the Easternmost point of Russia. In the autumn of 1648 the expedition headed by Semyon Dezhnev has reached these places for the first time, in fact, opening the Bering Strait. Due to the fact that nobody in Europe knew about it at that time the priority of the discoverer went to Vitus Bering, and the strait was named after his, despite the fact he has crossed the strait more than 70 years later than Dezhnev had done it! Such is a historical injustice.  Fortunately, the cape was renamed in honor of Semyon Dezhnev after all. 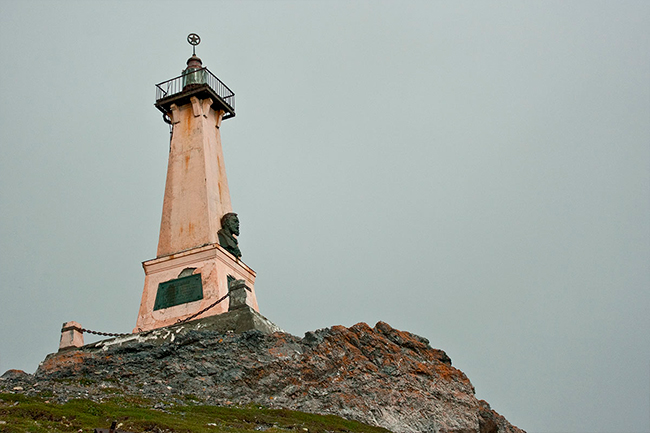 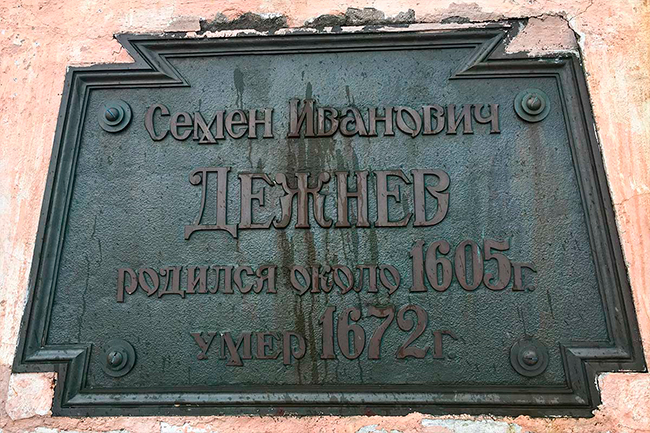 The remarkable place with a lighthouse — a monument to Semyon Dezhnev, located about 100 meters above the Bering Sea level, has its special Arctic beauty. On the Cape you can also see an archaeological site Ekven dating back to the 1st millennium BC, as well as Naukan, the abandoned village of marine mammal hunters, whose inhabitants were forcibly relocated as part of the Soviet enlargement program. The surreal beauty of abandoned houses is surprisingly attractive. In this respect, Cape Dezhnev is one of the best places that I have ever seen. 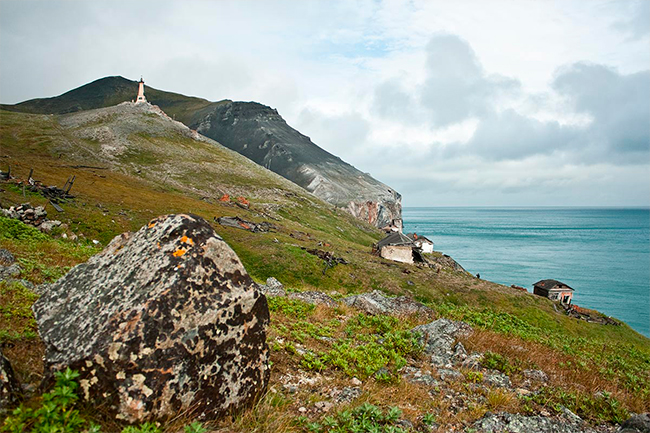 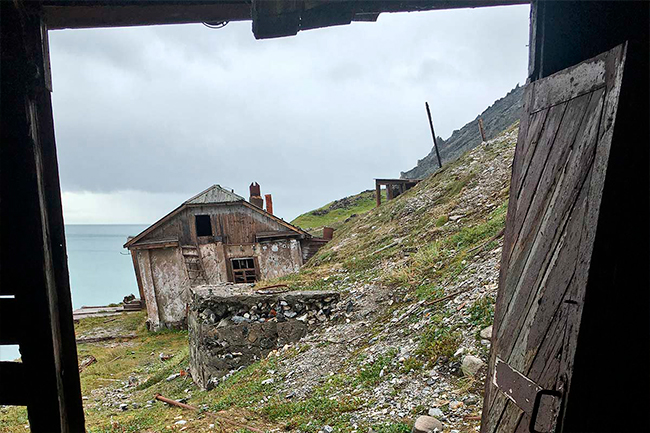 At the end of the trip, there has been another amazing encounter with whales. Huge mammals pleased us with their games during the boat trips, and later passed right along the shipboard in a group. I’ve managed to capture whales on my smartphone! I still can't believe it. 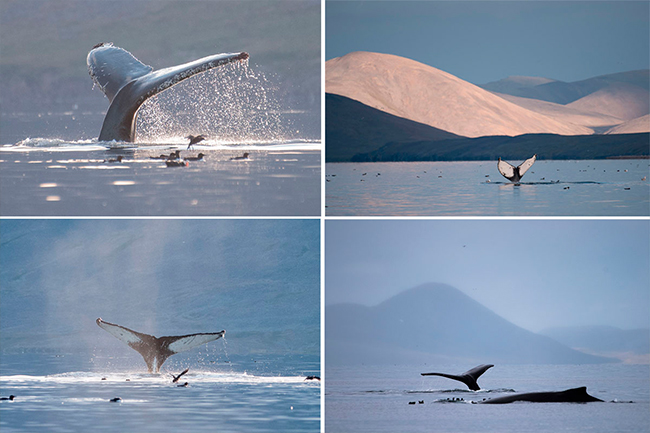 The Russian Arctic is amazing. Anyone who has ever come to the North consciously will strive to return here again, whether it is the Kola Peninsula or the distant Wrangel Island. And so do I!"

If you also want to feel yourself like a discoverer, join our cruise to Wrangel Island. We will be glad to tell you further details and answer all your questions, just call +7 (495) 800-8-800 or email us at hello@russiadiscovery.ru