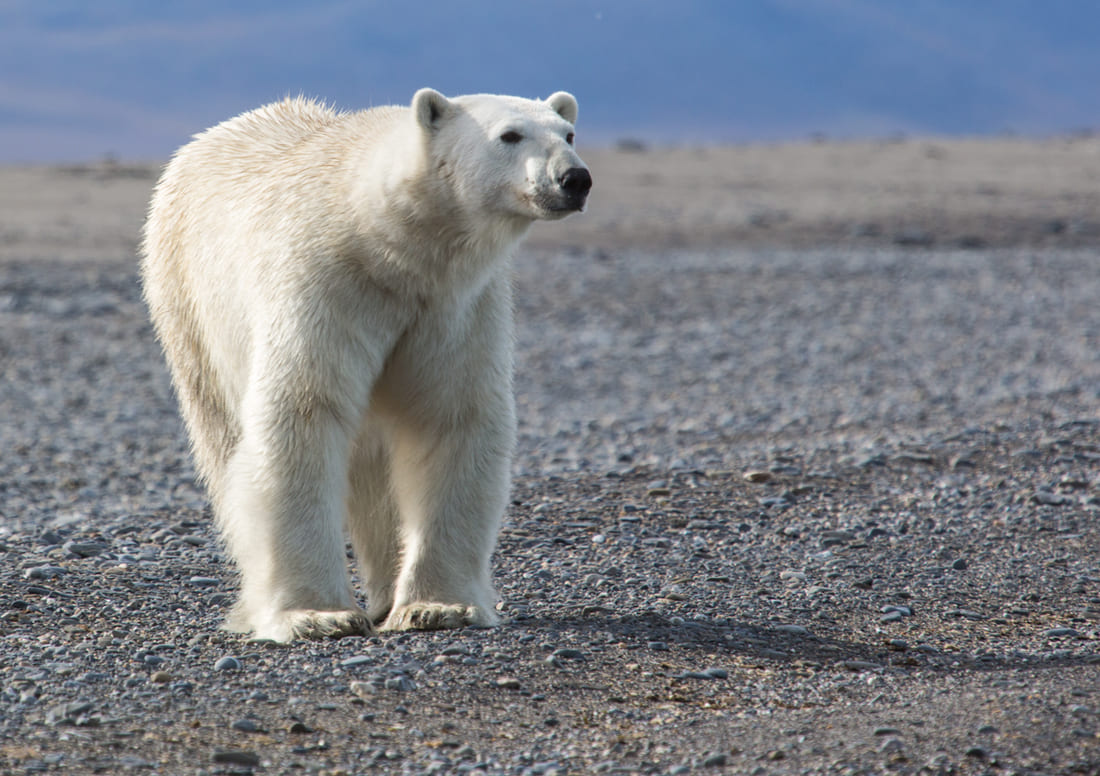 In the Russian Arctic, in the farthest eastern corner lies the Wrangel Island, home to extremely diverse and exotic wildlife, the last known habitat of the wooly mammoth. Neither the harsh polar climate nor isolation frighten the Arctic fox, the polar bear, or the musk oxen—its landmark species. Find below how to find this magnificent place and what amazing discoveries it has for daring explorers. 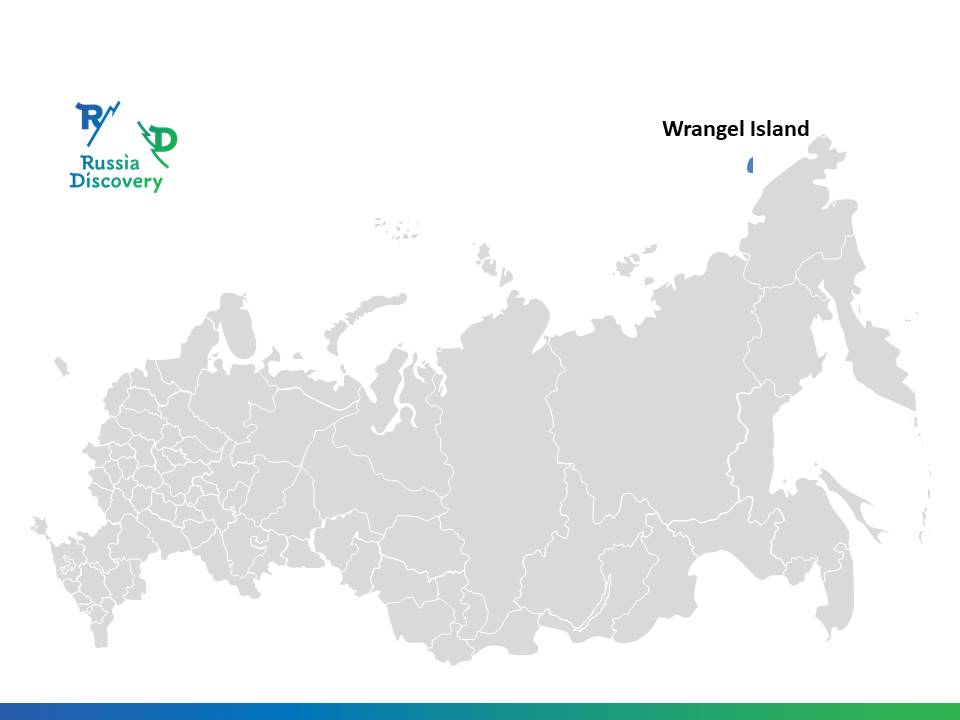 How to Get to Wrangel Island

As remote as it is, the Wrangel Island is only accessible by a tourist cruise ship—and since the place is a sanctuary, an official permit is required to get in. Ships depart from the Port of Anadyr, a small northern town you can fly to from Moscow or Nome, Alaska (charters only). An independent traveler may try to reach the island onboard an icebreaker or another maintenance vessel, though this is strongly advised against. 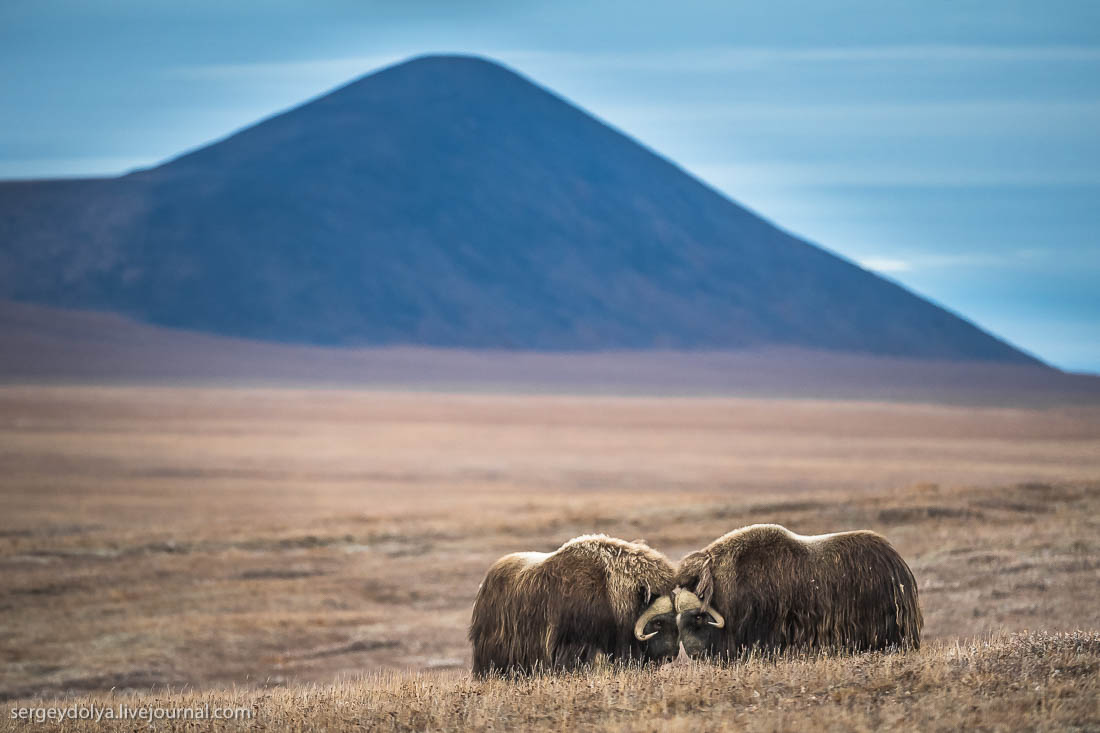 The Wrangel island has a harsh polar climate typical of any small chunk of land in the Arctic. It rarely gets higher than 6C (42F) in July, while it also may be as low as -58C (-72F) in December. It’s also foggy and frosty most of the time. No wonder the local population, mostly animal, had to adapt to it—find out more below. 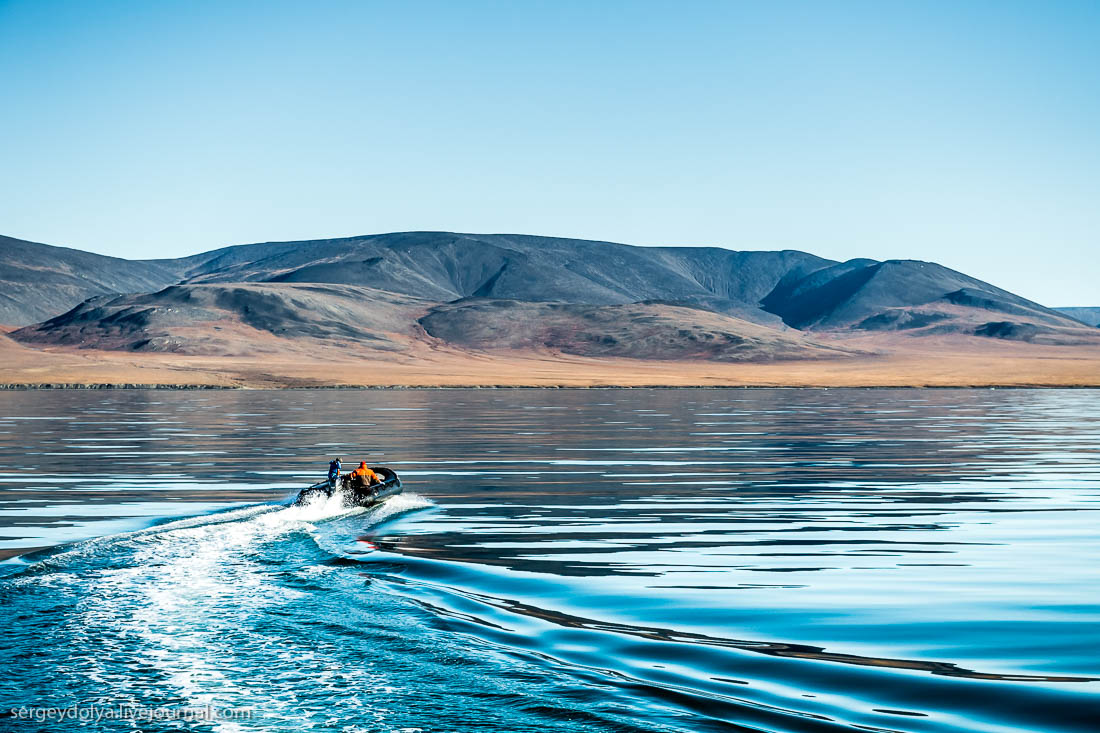 How Large is Wrangel Island 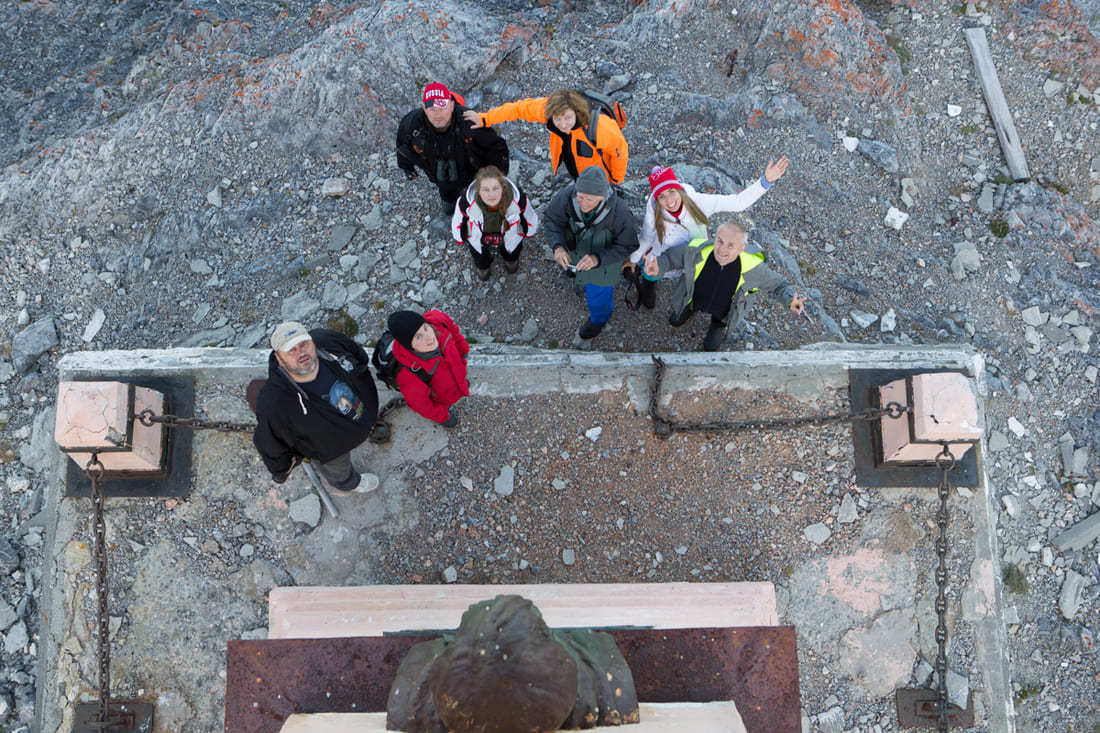 A few years ago, the tiny village of Ushakovskoye was inhabited by a couple hundreds of Yupik and Chukchi people; now it’s abandoned, though the military facilities located there are still conditionally habitable. There is also a small ranger force monitoring the wildlife to keep its status quo. In summer, when the Arctic Ocean melts and becomes navigable for cruise ships, tourists arrive for a short time on a special permit. Aside from these few humans, the island only welcomes its natural dwellers: Arctic foxes, polar bears, Pacific walruses, musk oxen, and snow geese. Occasionally, people find wooly mammoth tusks washed ashore, a striking reminder of what was once home to the best-known extinct mammals. 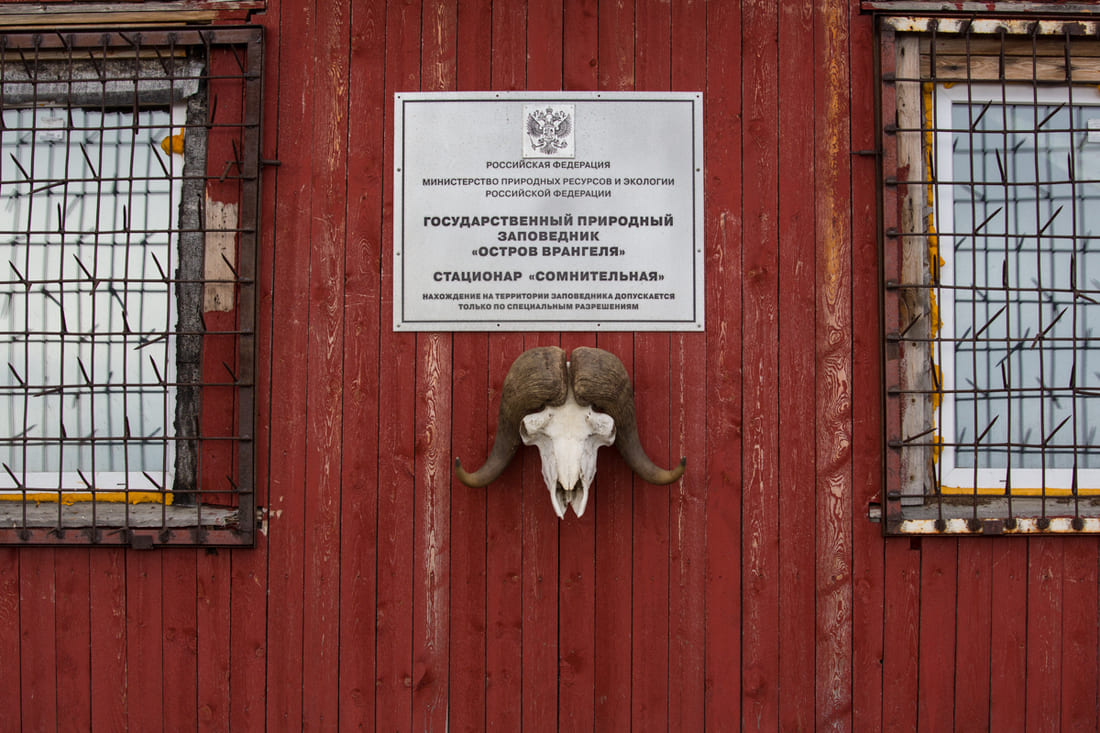 As the Wrangel Island is a Russian state-protected sanctuary with rangers being its only permanent residents, the official language here is Russian. 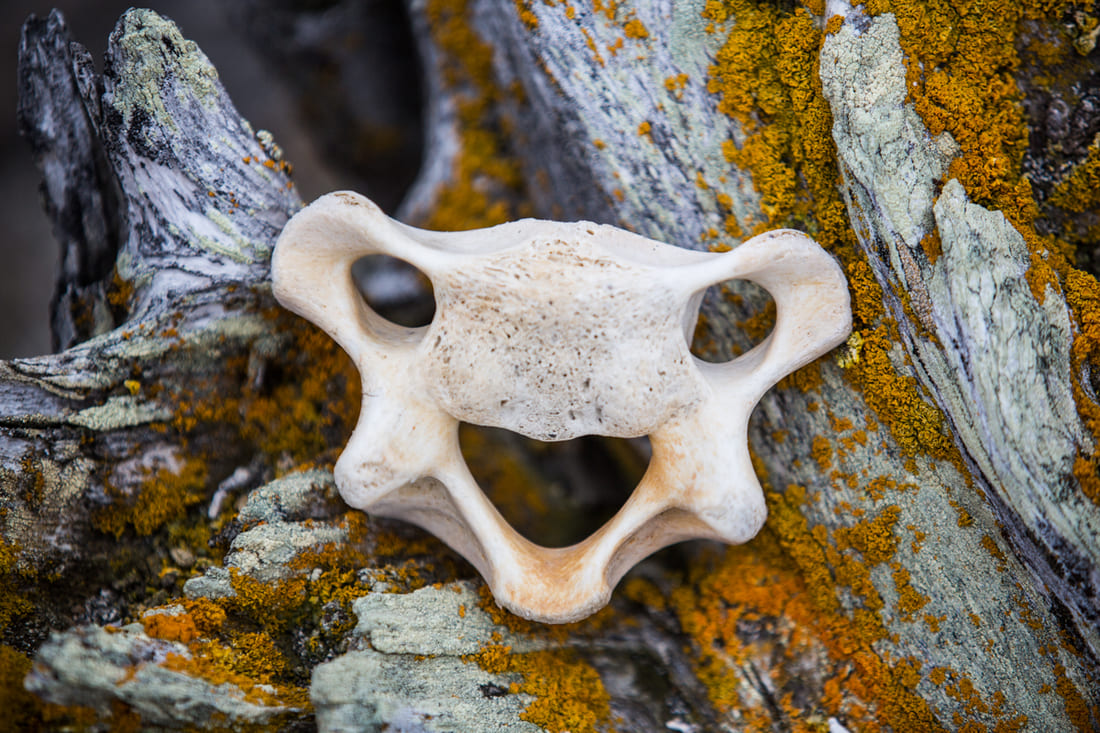 First human settlements on the island appeared as far back as ~1800 BC, as evidenced by radiocarbon dating of stone and ivory tools found in Chertov Ovrag (Russian for the Devil’s Clough). Their advanced hunting skills likely contributed to the extinction of the last surviving wooly mammoth population. The mammoth still dwelled there, five thousand years after their mainland counterparts were gone for good. Still, the wooly mammoth was in clear decline by the time the first human settled there, as evidenced by DNA analysis of their remains.

Eskimos inhabited the island in these prehistoric times, and Inuit people of Alaska would sometimes stay there while traversing the icebound traderoute to North Siberia. By the time the Europeans discovered the island, it no longer had any human presence. 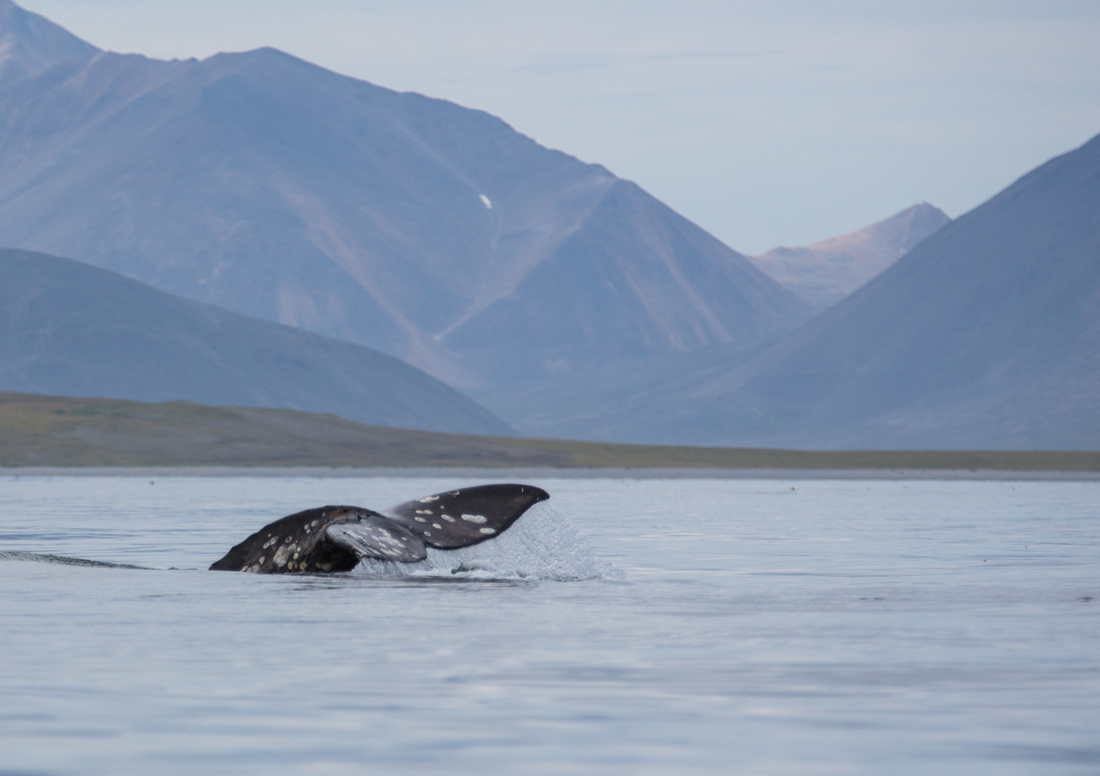 In 1764, the island was presumably discovered by Stepan Andreyev, a Russian Cossack. Baron Ferdinand von Wrangel funded an expedition that attempted to confirm the discovery in 1820–24, to no avail. Still, the endeavor earned the island its name. Persons claiming the discovery included the British captain Henry Kellett (1849) and the German whaler Eduard Dallmann (1866).

Sighting the Wrangell Land was reported in 1867 by Thomas Long, an American whaler. In 1879, George W. DeLong’s expedition passed by the Wrangel Island before it shipwrecked near the New Siberian Islands. 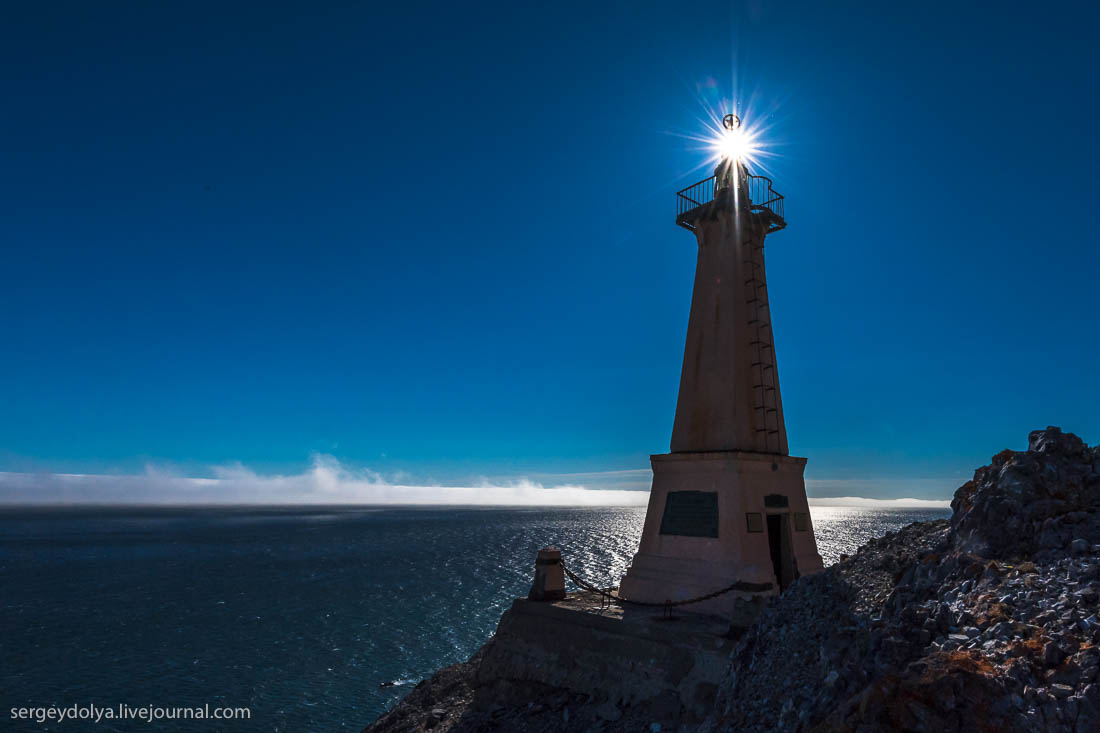 Final successful landing and resettlement only took place in 1911, as the Russian Arcric Ocean Hydrographic Expedition commanded by Boris Vilkitsky set foot there and claimed the island for the Russian Empire.

In 1921, Canadian expeditionary force led by Vulhjalmur Stefansson attempted to claim the island for Canada; however, their schooner was struck in the ice. In 1923, Iñupiat Ada Blackjack, the sole survivor of the expedition, was evacuated by another ship that brought 12 Inuit and their American leader Charles Wells to settle the island. This group and a newborn Inuit were removed there by the Soviets in 1924. 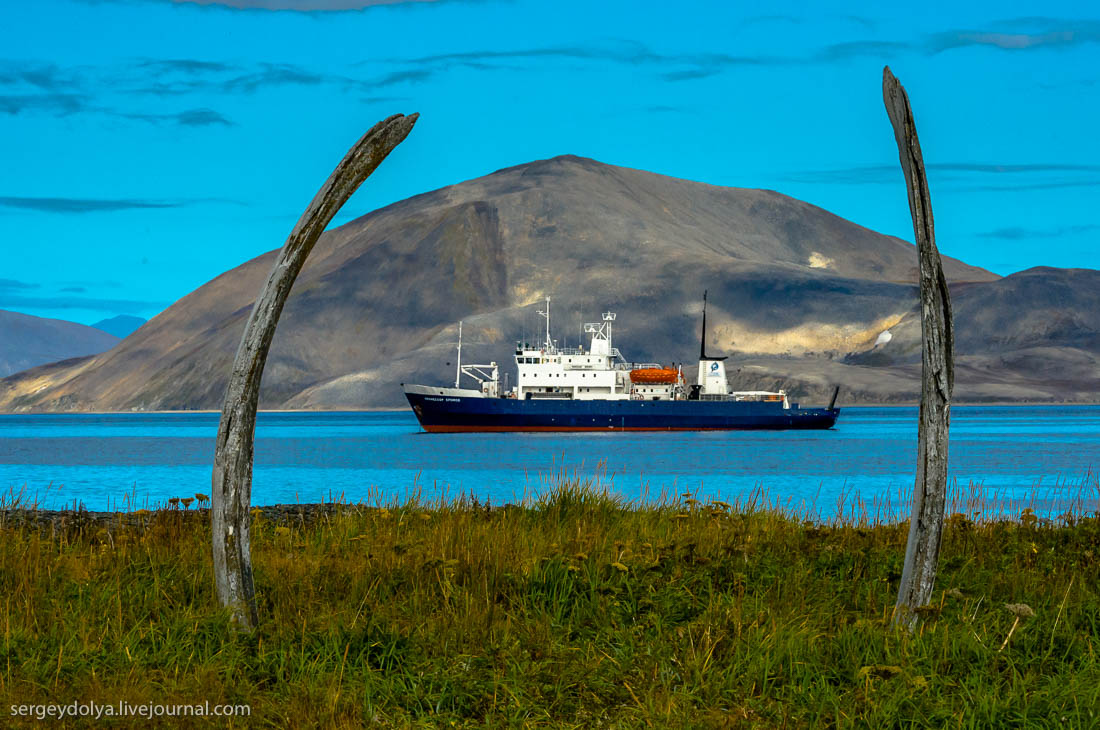 Soviet resettlement and reclamation began in 1926.In the 1930s, governer Konstantin Semenchuk made himself a self-proclaimed king of the island, resulting in a local bloodshed. He was subsequently sentenced to death. In 1948, domestic reindeer were introduced to the island. In the 1960s, the Soviets constructed a military base, soon to be abandoned.

Finally, in 1976 the Wrangel Island became what it is today: a national natural sanctuary. In 2004, it got its status of a UNESCO World Heritage site. 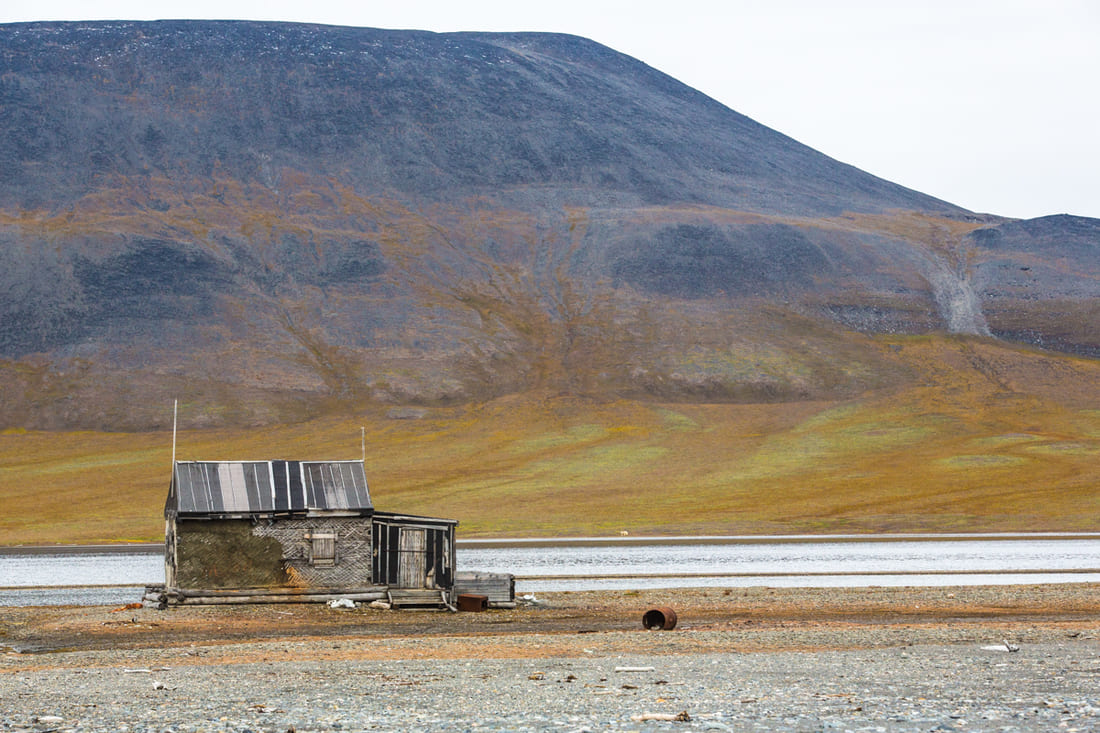 Despite once having a significant Eskimo/Inuit population, the island bears no remnants of their dwellings. It still features an abandoned military base with a lot of debris though. A few dilapidated buildings scatted around a small uphill make a hardhome for the rangers stationed here. 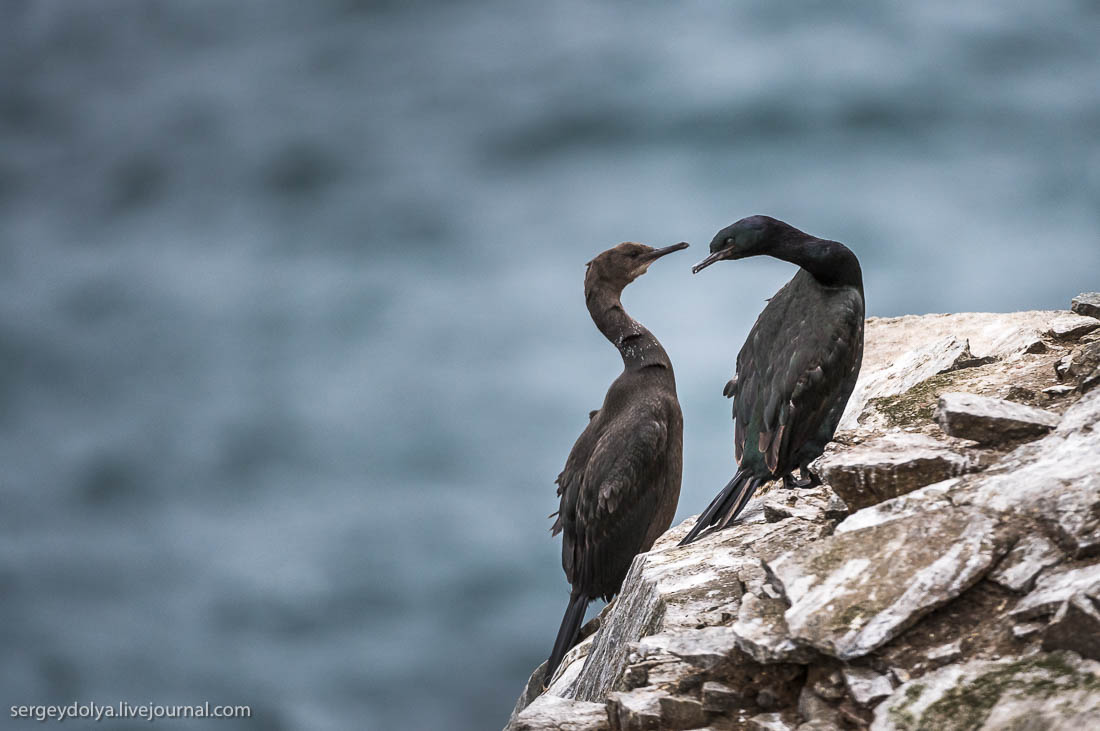 Despite being in the Far North, where the only maritime route is icebound and non-navigable for most of the year, the Wrangel Island features surprisingly diverse flora and fauna, having far more species and endemics than any mainland tundra area comparable in size. 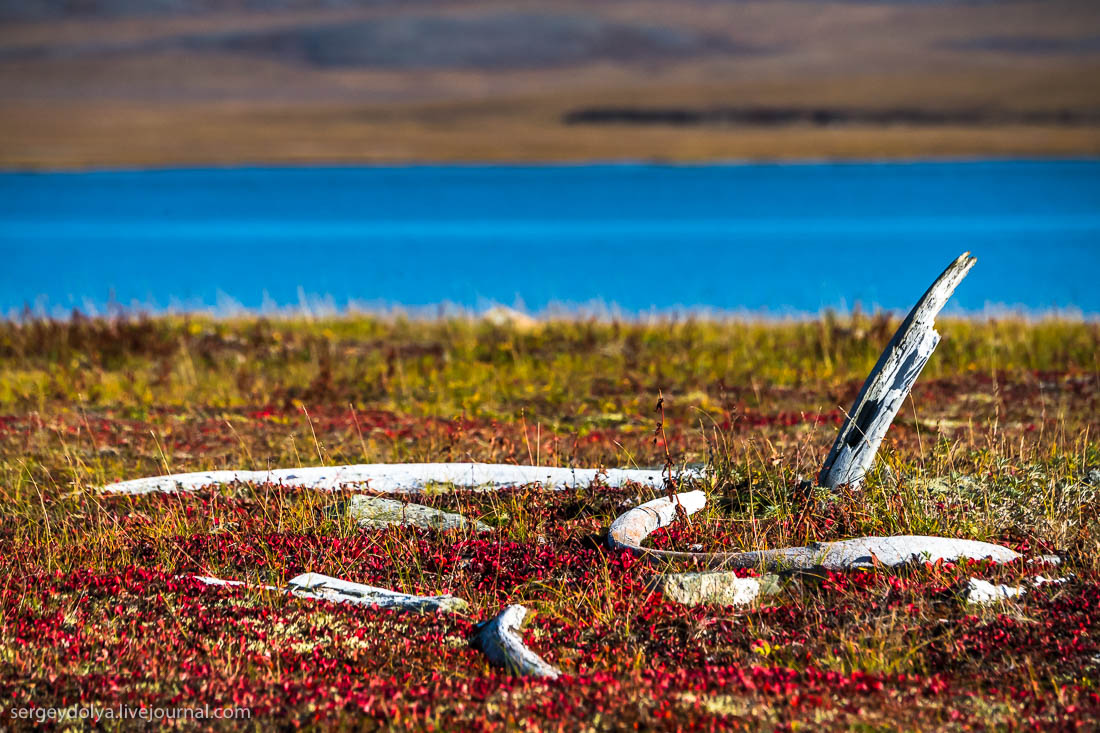 The Wrangel Island has 417 plant species, making its flora far more diverse than any other Arctic island. While the climate is polar/subpolar, it does have some diversity despite the island being relatively small. It is harsh and severe, but still capable of sustaining a healthy population of some rare and relict plants completing its fully self-contained and isolated ecosystem that emerged as far back as during the Quaternary. 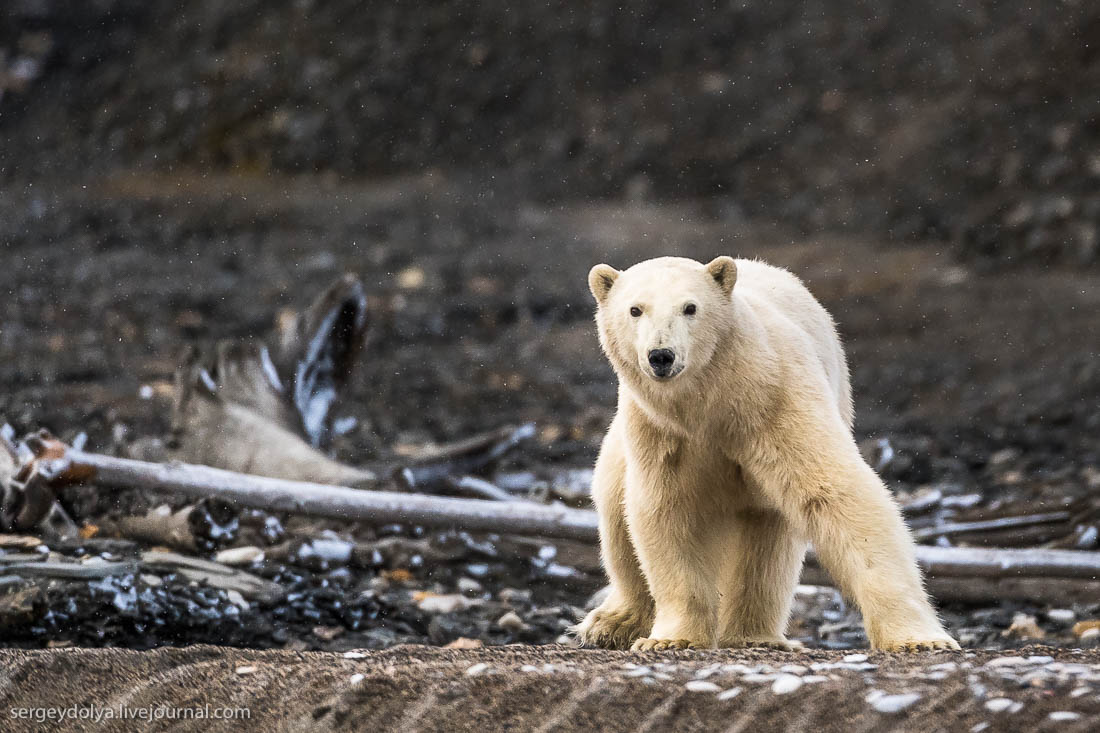 The true landmark and lord of the everfrozen Arctic expanses, the Polar Bear dominates the Wrangel Island. With its population on the rise, bears sometimes pay visit to the human settlement on the island. Some fear human-bear encounters might soon become a problem; however, so far such encounters have been peaceful. Bears, natural predators as they are, feed on bearded seals when they can traverse the icebound Arctic Ocean; in warmer seasons, they are often spotted gathering around a carcass washed ashore. 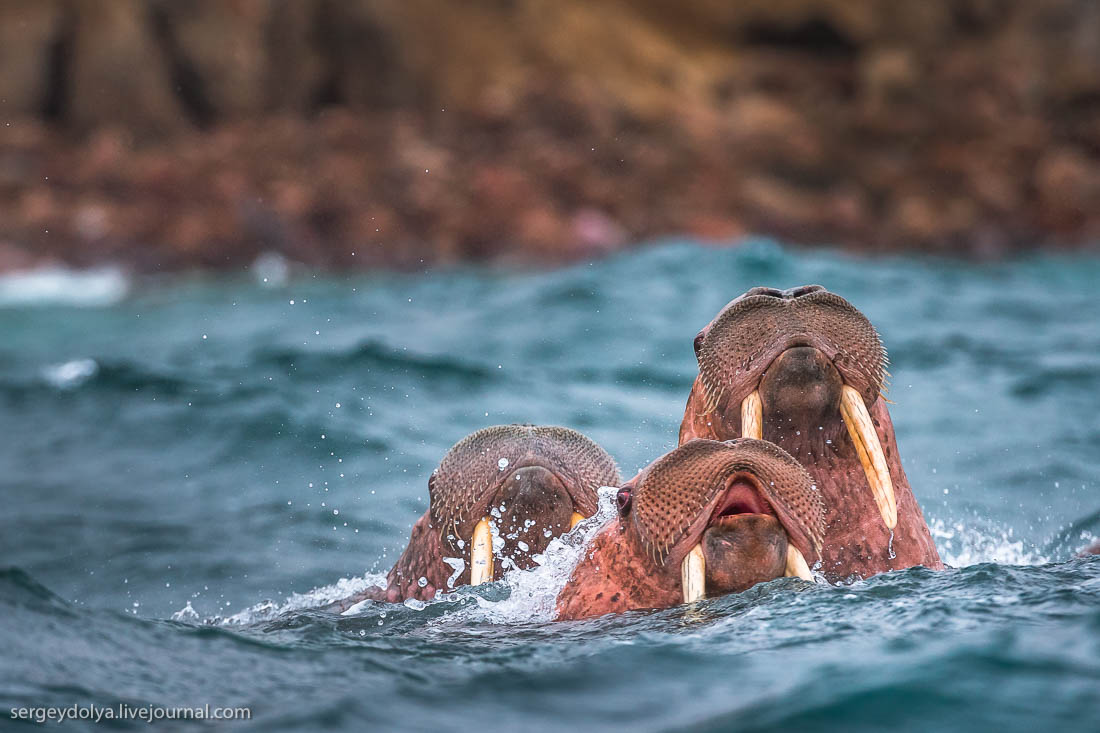 The Pacific walrus, another landmark and keystone species of the Wrangel Island, is so numerous its rookeries on the ocean coast sometimes gather as many as a hundred thousand walruses. Hunted for meat, ivory, and blubber, the walrus population was in decline for much of the 19th century but began recovering later in the 20th century. Now, tourists and rangers alike are sometimes amazed to see the walruses fighting for life against their predator, the polar bear. 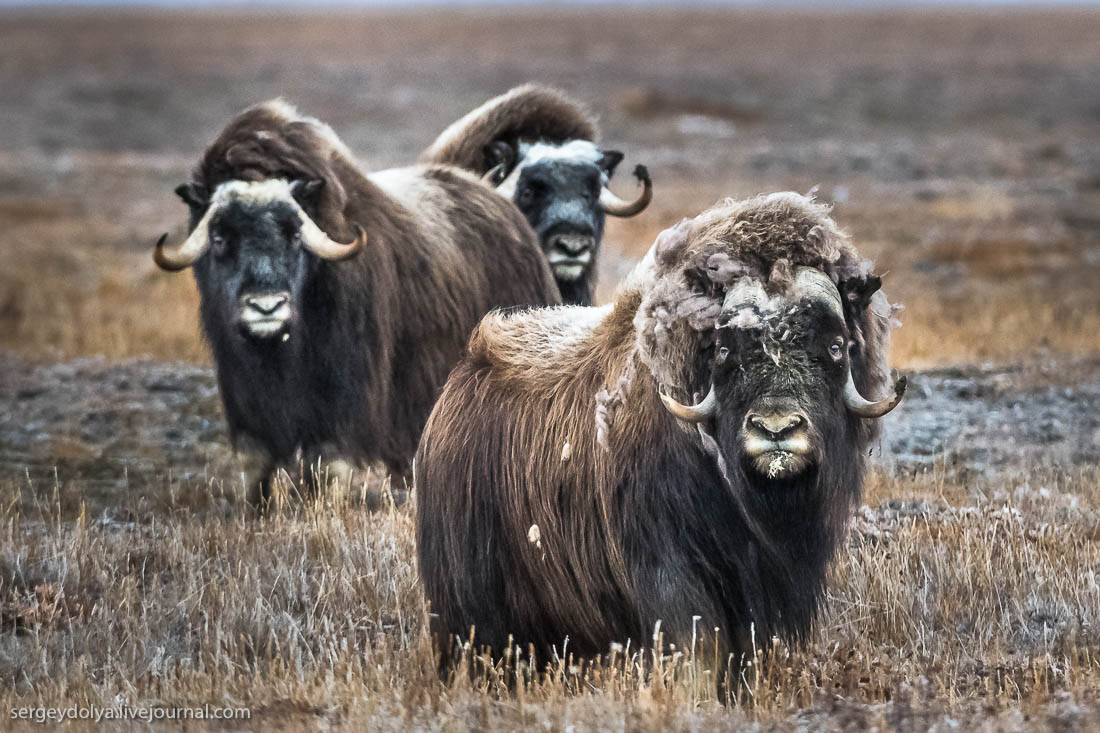 The musk ox is not native to the Wrangel Island per se; rather, a small group of 20 animals was brought here from Canada in 1975, now grown to a considerable herd of 200 heads. They flock together to brave the harshest winters the human mind could ever imagine, magnificent in their thick dark fur. However, the oxen ancestors actually lived here in late Pleistocene, with the reason of their extinction being disputable today. 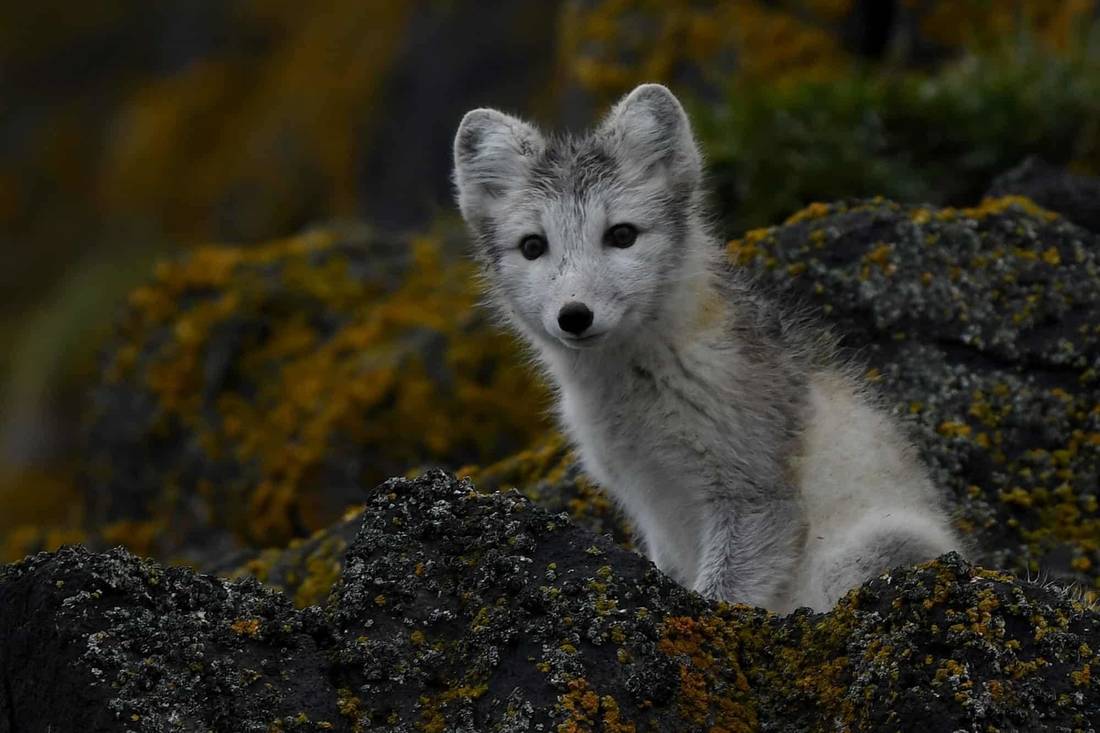 The Arctic fox, a “space gray” or white canine whose fur color depends on the season and can often be caught amidst its transition, is a keystone species responsible for keeping the snow geese population within sustainable numbers. 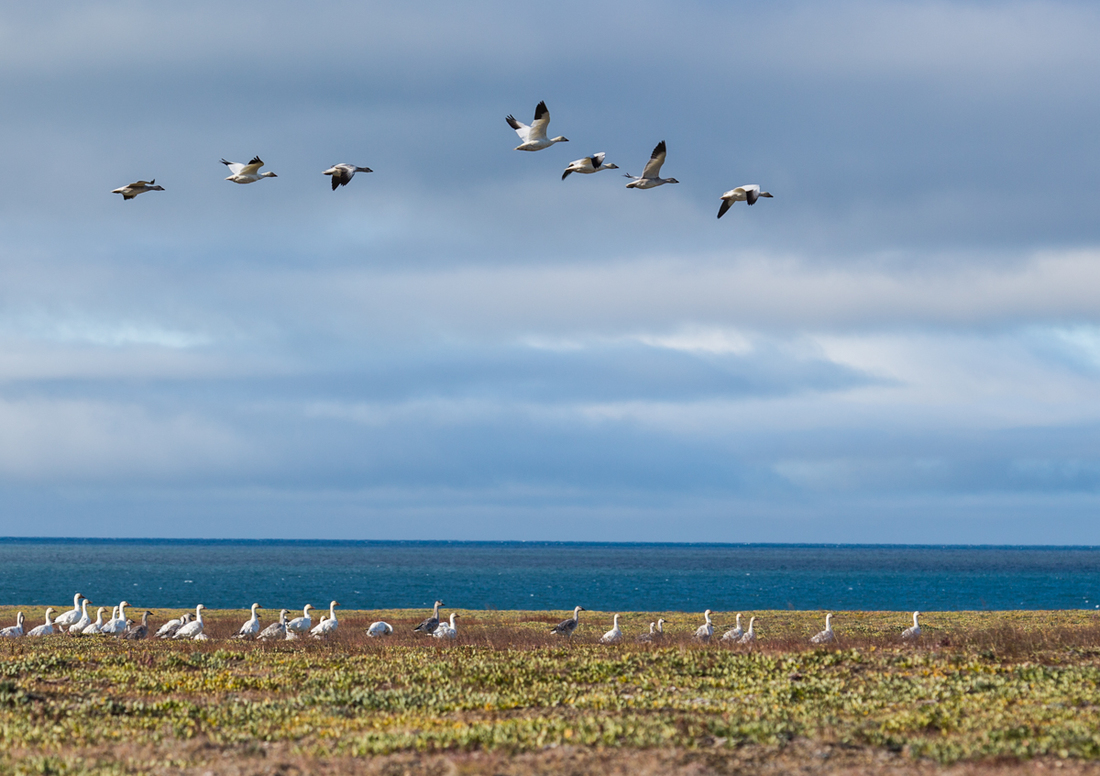 Snow geese is one of the 165 migratory bird species whose rookeries the Wrangel Island hosts in numbers. They come here for breeding and fly away to North America for winter. Until recently, their population was in decline but is now recovering. 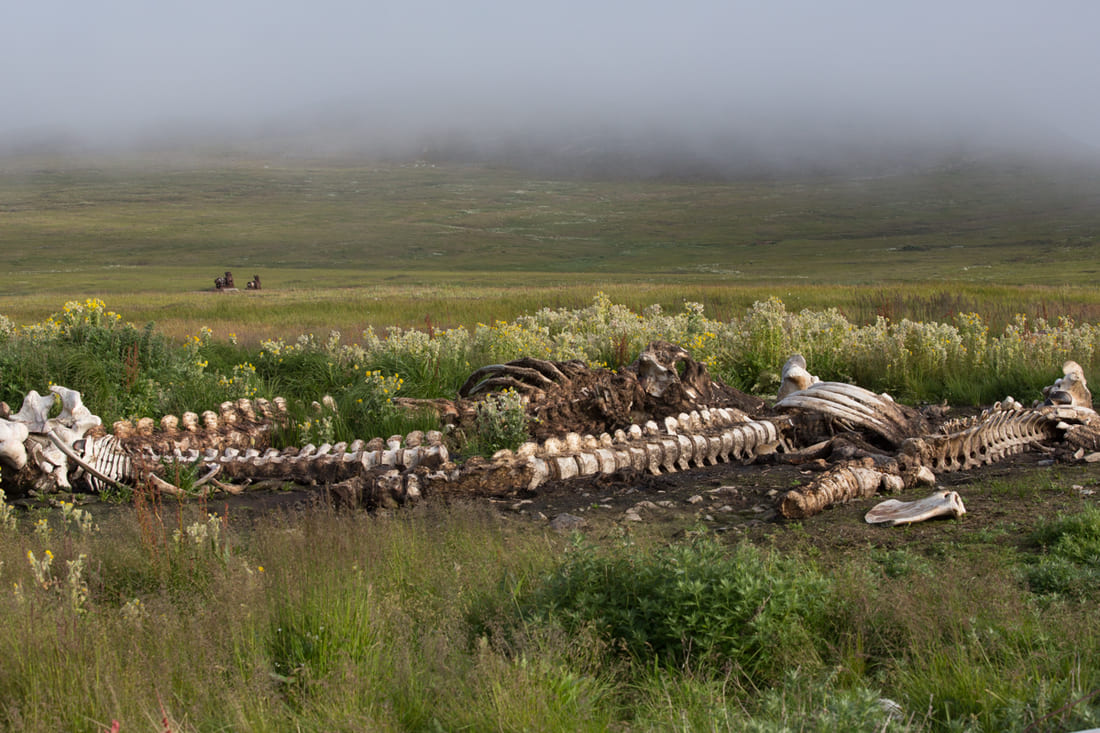 Long gone dead in the mainland, a small endemic population of the wooly mammoth survived on the Wrangel Island until the first humans arrived about 2000 BC. They probably got there by walking the ice on a short 87-mile corridor from the northernmost tipe of East Siberia. Mammoth tusks are still found in numbers, washed ashore or simly lying on the riverbed, many being virtually intact. Genome sequencing shows the mighty wooly mammoth was not that mighty at the time: harsh conditions, unsuitable for significant breeding, reduced their reproduction rate drastically and kept the population too small to sustain genetic diversity, leading to a steady gradual degradation of the species. So, perhaps the wooly mammoth would be gone even without any human involvement. 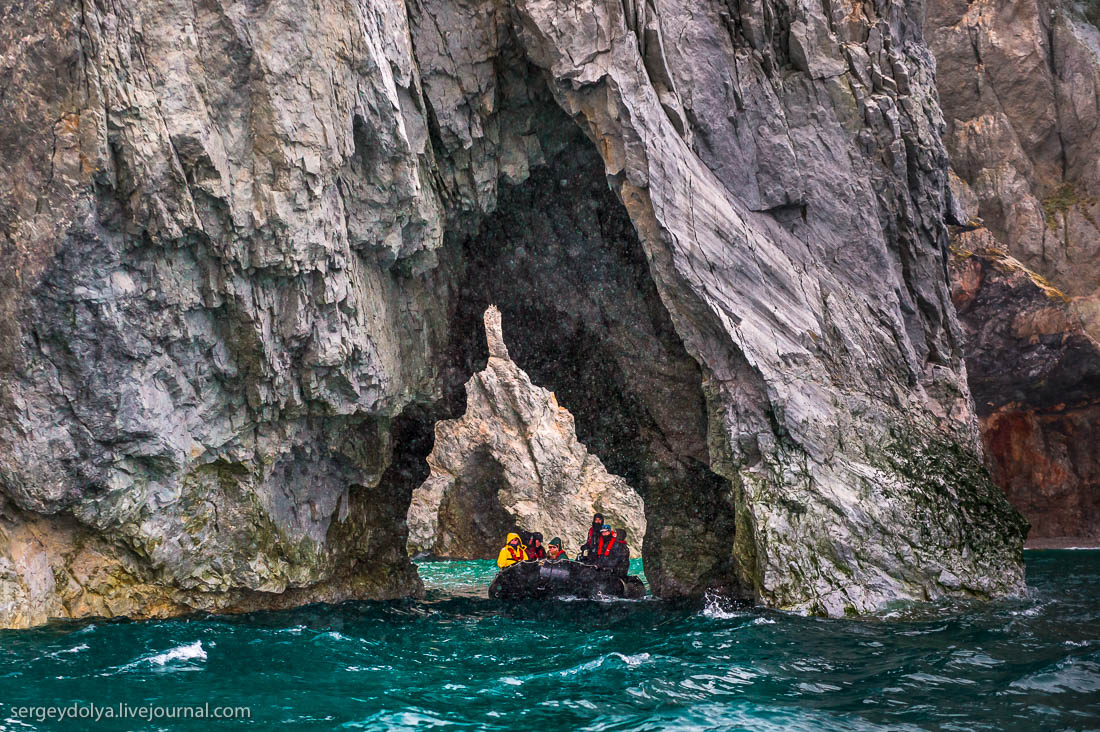 The Wrangel Island is one of those few corners of the Earth that are off the charts for mainstream tourists. However, there is no shortage of magnificence and oustanding experiences for those brave explorers who’d dare challenge the inhospitable land named after a Russian adventure patron of the 19th century. It’s strongly advised, however, not to roam the place on one’s own; for those whose penchant for exploration is unsatiable, rangers can (and likely will) make a good company, not only to guide or rescue the tourists if things go south, but also to prevent the adventurer from harming the place and its nature.

In summer, the most recommendable mode of transport is an all-terrain quad. In winter (if a tourist ever manages to get there in winter), snowmobiling is the best option.