Despite the fact that the Russian Far East seaboard stretches for thousands of kilometers, there are less people than in Moscow. The main inhabitants of these lands are brown bears, killer whales, walruses and countless birds colonies. All of them you can see in this journey travelling along the Kamchatka coast.

On this journey from Anadyr to Petropavlovsk-Kamchatskiy you will make numerous landings along remote Pacific coastlines in sites that few people visit such as river mouths, fiords, bays and islands. It will give you great opportunities to discover the untamed and beautiful landscapes as well as to get acquainted closely with the nature and wildlife of the Russian Far East.

During this cruise you will visit three regions of the Russian Far East: Chukotka, Kamchatka and the Commander Islands

Highlights of the route:

The cost depends on a type of selected cabin. See details in the "Accommodation" section. 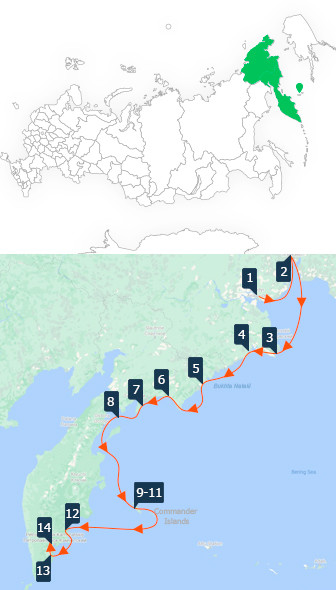 The journey begins with a meeting at the airport of Anadyr, where you should travel to on your own. Please, note that the return tickets you need to take from Petropavlovsk-Kamchatsky, where the route ends. We are ready to help with the purchase of tickets, if necessary, leave a comment in the application.

Here is the general plan of the expedition, the route may vary depending on the weather.

Upon arrival in Anadyr you will be taken to the port where you will board the expedition ship. You will get acquainted with the crew and expedition staff, who will arrange a tour of the ship, show cabins, and hold a safety briefing.

You will spend the day in and around the town of Egvekinot on the shores of Kresta Bay. The town was built by Gulag prisoners who were then forced to construct a road to the mine. You will explore the town which has an excellent museum, the road and tundra as well as visit the Arctic Circle.

This coastline is rich in marine mammals and one creature we will be looking for, in particular, is the walrus. The bukhta (or bay) was named after Commander Vitus Bering’s ship, the St Gabriel, of the First Kamchatka Expedition. Behind the expansive beach there is a lagoon where you can explore for waterfowl and waders.

You will start the day with a visit to the delta of Pika River – a well known walrus haul out.

During a Zodiac cruise along the river’s cliffs you can expect to see the rowdy spectacle of thousands of nesting Black-legged Kittiwakes, and may also see Harlequin Ducks, Pelagic Cormorants, Common Guillemots and Glaucous Gulls.

Along the Koryak Coast there are many beautiful fiords (bukhtas or bays) and none are more beautiful than Bukhta Natalii. This fiord has two smaller fiords that drain into it from the south. You will hike from one bay to another whilst surrounded by the magnificent mountain landscapes and tundra vegetation.

Much of the southern Govena Peninsula was recently made into a state reserve. There are a number of fiords included in the reserve; one of the most spectacular is Tintikun Lagoon which is one of the most picturesque locations found anywhere in the world. A large population of brown bears inhabits this area, if you are fortunate you should see a number of them.

With an early morning planned, you will start the day with a landing on the remote, scenic shores of Bukhta Yuzhnaya Glubokaya on Kamchatka Peninsula’s eastern coast. Landing near the base of a stream that cascades down the mountains in a series of falls and torrents, you will walk through alpine meadows. The path upwards will follow the edge of the stream above the trees where panoramic views of the fiord below can be enjoyed.

After lunch you will sail south to Cape Primetniy, a reserve situated on Goveno Peninsula and nicknamed "Bear Gully" due to the number of brown bears regularly seen here.Cruising along the shores you will be looking for brown bears and, hopefully, observe some females with cubs. You will also see a breeding colony of Slaty-backed Gulls.

You will start the morning in Kamchatka Brown Bear country, an undisturbed habitat within the Koryakskiy Reserve, where you will go bear watching. Brown bears frequently visit this area which is completely protected and rarely visited.

In the afternoon you will visit Verkhoturova Island where Tufted and Horned Puffins, Pigeon, Common and Brunnich’s Guillemots and also Parakeet and Least Auklets can be seen. On nearby rocky islets there is a regular non-breeding haul out of Steller Sea Lions.

The wildlife-rich Commander Islands were first discovered by Commander Vitus Bering when his ship was wrecked here in 1741. He perished on the island along with many of his men. The reports from those that survived led to a ‘fur rush’ and the settlement of the islands.

There are two large islands (Bering and Medny) with two smaller islands Ariy Karmen and Toporkov. We intend to explore the islands through a combination of landings and Zodiac cruises. We plan to stop at the village of Nikolskoye. You will visit the fur seal rookery at North-West Cape and Zodiac cruise around the impressive bird colony at Ariy Kamen. We will also possibly visit the gravesite of Commander Vitus Bering and the remarkable Medny Island.

Olga Bay is a part of the very large Kronotskiy Reserve, which also includes the world-famous Valley of the Geysers. The habitat has lush Kamchatka forests coming right down to the beach. The area around Olga Bay is frequented by large numbers of Gray Whales that are usually quite friendly to visiting boats. The rising volcanoes in the background will provide a beautiful setting to explore real Kamchatka wilderness.

In the afternoon you will make your way along the Zhupanova River by Zodiac. This journey allows you to explore a river habitat which is common in Kamchatka. Steller’s Sea Eagles are known to nest in the lower reaches of the river.

If the weather is fine, fantastic views of the many snow-covered volcanoes that dominate the southern part of the peninsula will greet us as you sail up Bukhta Russkaya. There is also an excellent chance of seeing Sea Otters, Largha Seals, Steller Sea Lions and Orcas, as well as numerous sea birds.

This afternoon, if weather permits, we have arranged a helicopter to transfer you to the huge, freshwater volcanic basin that is Kuril Lake, a UNESCO World Heritage Site and reserve in the extreme south of Kamchatka. Home to a bounty of wildlife and one of the largest salmon spawning grounds in Kamchatka, the lake is also famous for the numbers of Brown Bears which bring their young to feed here. Exploring this wild-rich and remote outpost surrounded by the conical domes of lava islets under the guidance of the reserve’s rangers promises to be a once-in-a-lifetime opportunity.

During the night the ship will enter Avacha Bay which is one of the greatest natural harbours in the world. There will be a complimentary transfer to the airport or to a central downtown hotel.

"Spirit of Enderby" will be a ship for the expedition. It is a small expedition ice-class vessel. In 2013 it was fully refurbished for comfortable accommodation of 50 passengers.

Onboard there is a bar, a cosy lounge, a lecture hall and a library with a big collection of thematical books. A spacious bridge is always open for passengers. You can also view sea animals from open decks.

The cost of the cruise depends on the type of cabin:

The price is per person. Payment is made in rubles at the exchange rate of the Central Bank +3%.

Who will be my guide +

The crew of the ship is Russian-speaking, there are both Russian and English speaking guides.

Cooks can prepare meals according to your diet if you inform them in advance.

What to bring with me +

When choosing clothes and shoes, consider the features of the cruise. The temperature on the Northern route points can drop to 0°C.

Shoes: boots with a grooved sole will allow you to stand most steadily; rubber boots are necessary, but they can be given on the first day of the cruise for free. If you plan to take your own boots, they should be up to mid-calf or higher with a thick ribbed non-slip sole. In some landings will have to step into the water to a depth of 25 cm. Also it can be quite slippery on the ice and on the shore. Make sure the boots sit comfortably on a woolen sock, it is important to bring warm insoles. In addition, you need sandals, sneakers or any other comfortable shoes for the ship and slippers for the shower.

Documents: passport, boarding pass on board (issued or sent by mail), plane ticket, copy of insurance.

Top of the world