Far North of Russia. The region’s name itself says it lies far from the ordinary world. So, you expect to find there ‘unordinary’ things like Arctic tundra, polar bears, reindeers, and Northern lights. Besides these, you will meet there people, the Nenets and Chukchis, who moved to the Extreme North before the 12th century. 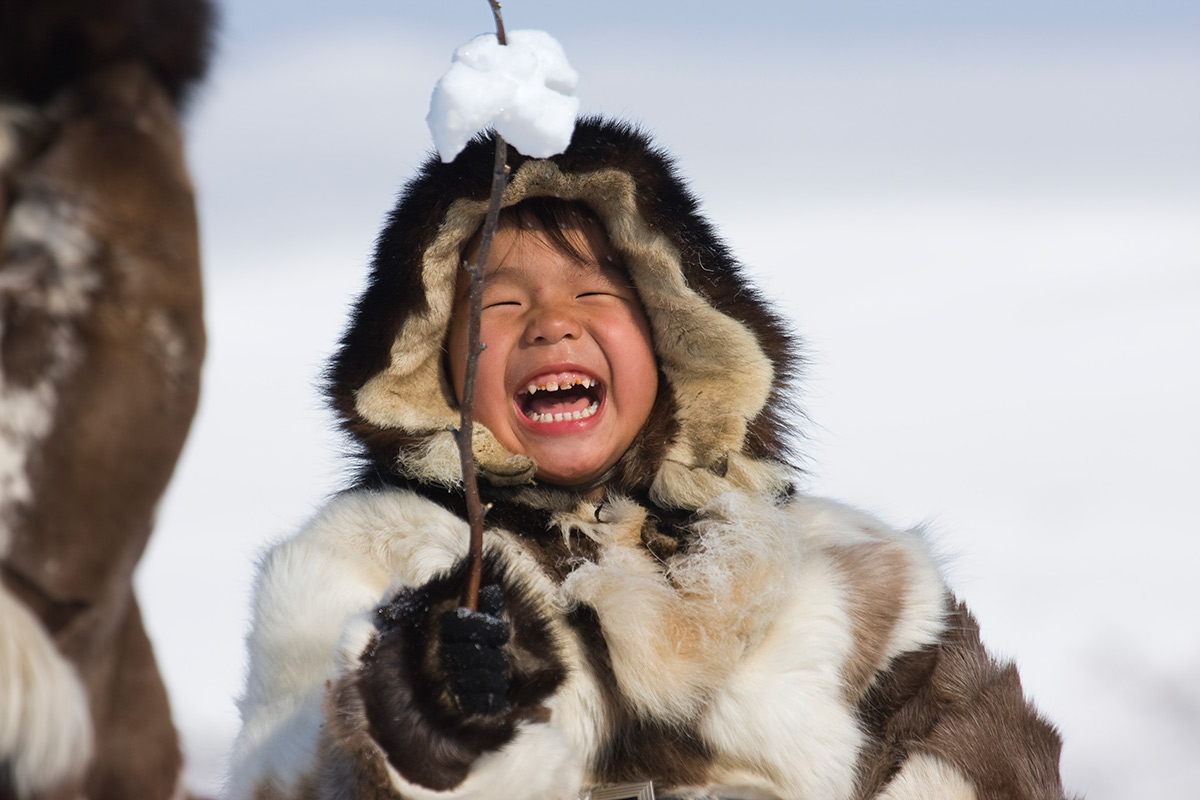 Living under the Arctic Rules

The Arctic determines its own rules for those who live there, both animals and people. The first indigenous people of the North had to develop their own mode of life adapting to harsh conditions. During the ages it was being tested to survival by the cold, severe environment, wild animals, Polar night, and isolated location.  So, once ‘approved’ by the rigorous Arctic, the northern people’s way of life has scarcely changed within time.

Nenets – “Children of a Deer”

Having arrived to the Nenets Autonomous Okrug, you understand why our journey to this area is called The deerest weekend and why the Nenets call themselves “children of a deer.” You see reindeers all around – the beasts themselves, their hides used for making traditional dwellings and clothes, antlers serving as decoration and toys, and, of course, the national meal prepared from meat and antlers of a reindeer. 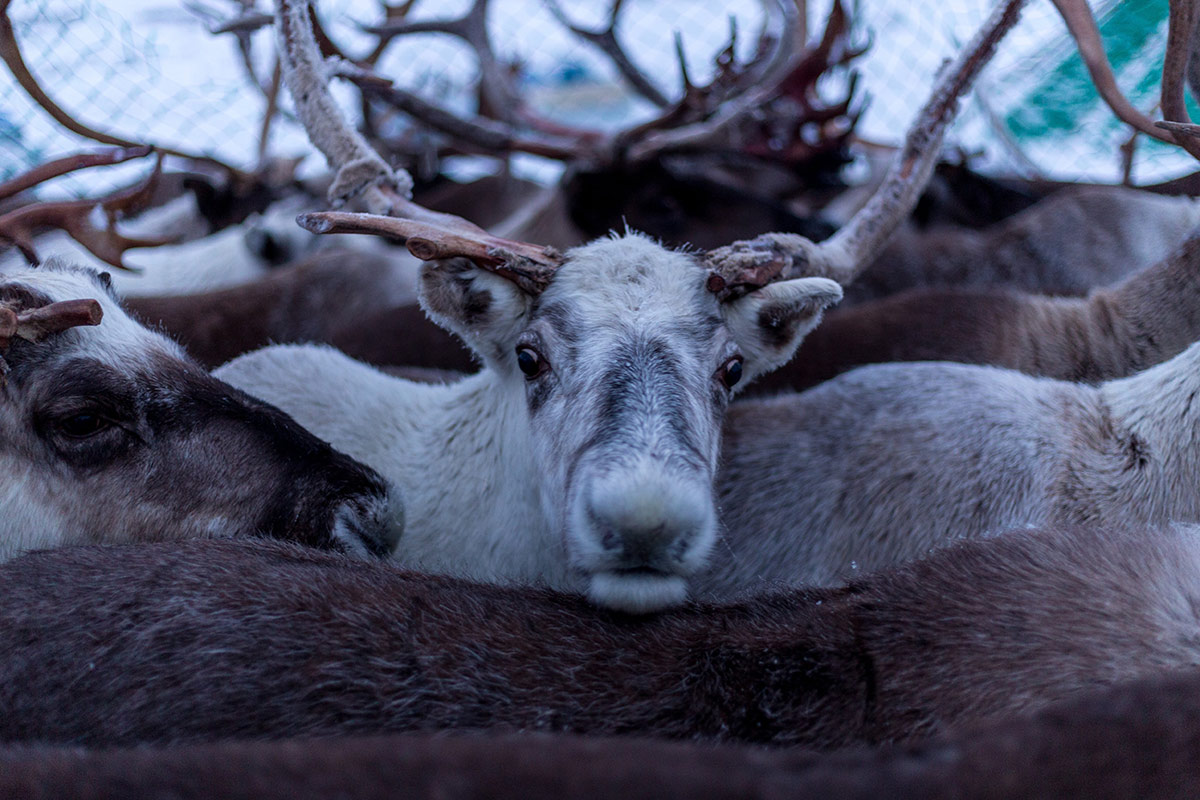 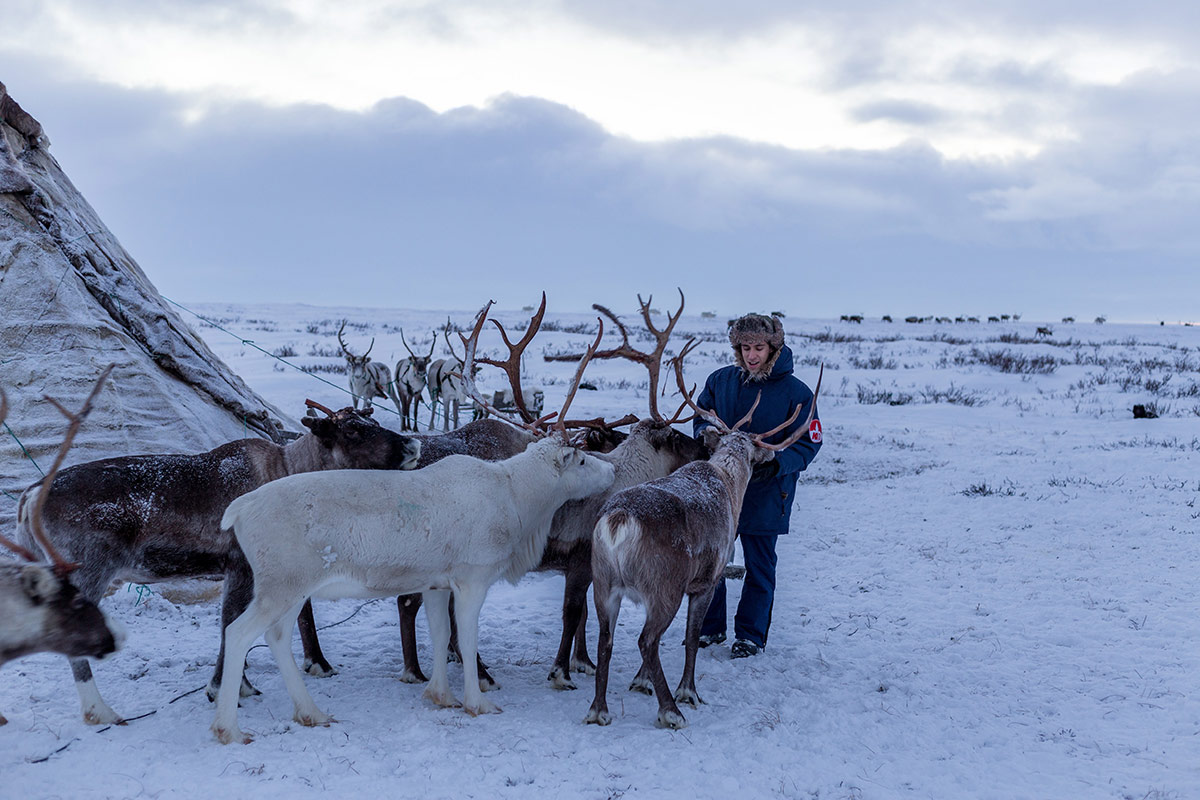 Not quite ordinary for the Europeans, its women who are responsible for setting a traditional house chum. 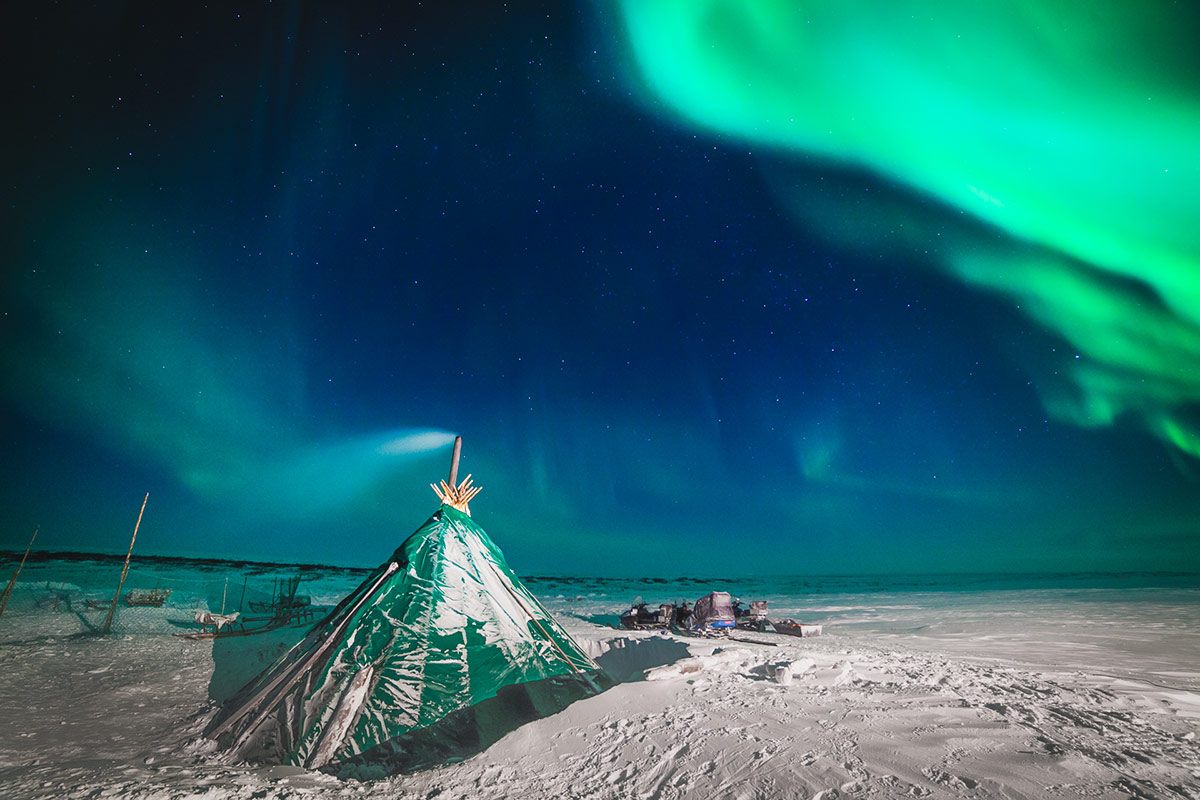 For a Nenets woman, it takes just 1-2 hours to ‘build a house’, and such quickness is really important: the tribe migrates all year round, unsetting and setting their dwellings each time, and in winter the temperatures reach -50°C. The Nenets use a reindeer hide to make ‘walls’ and a fur side of the hide to make sleeping places inside a chum. 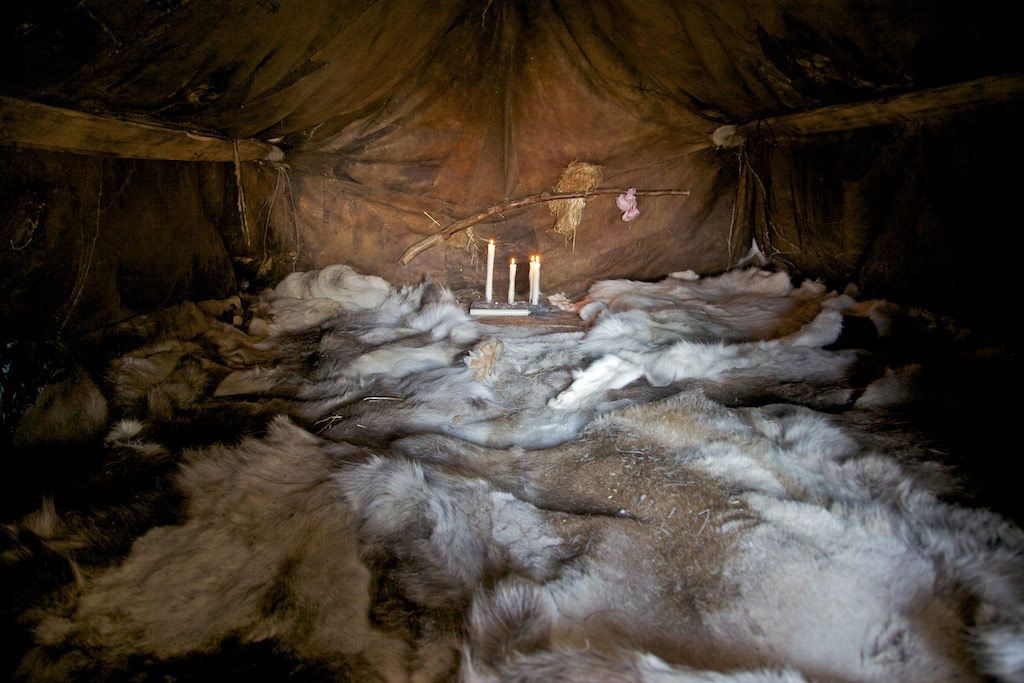 About 75 hides are necessary for setting one dwelling. There is a fire place in the middle. The only furniture is a big table. 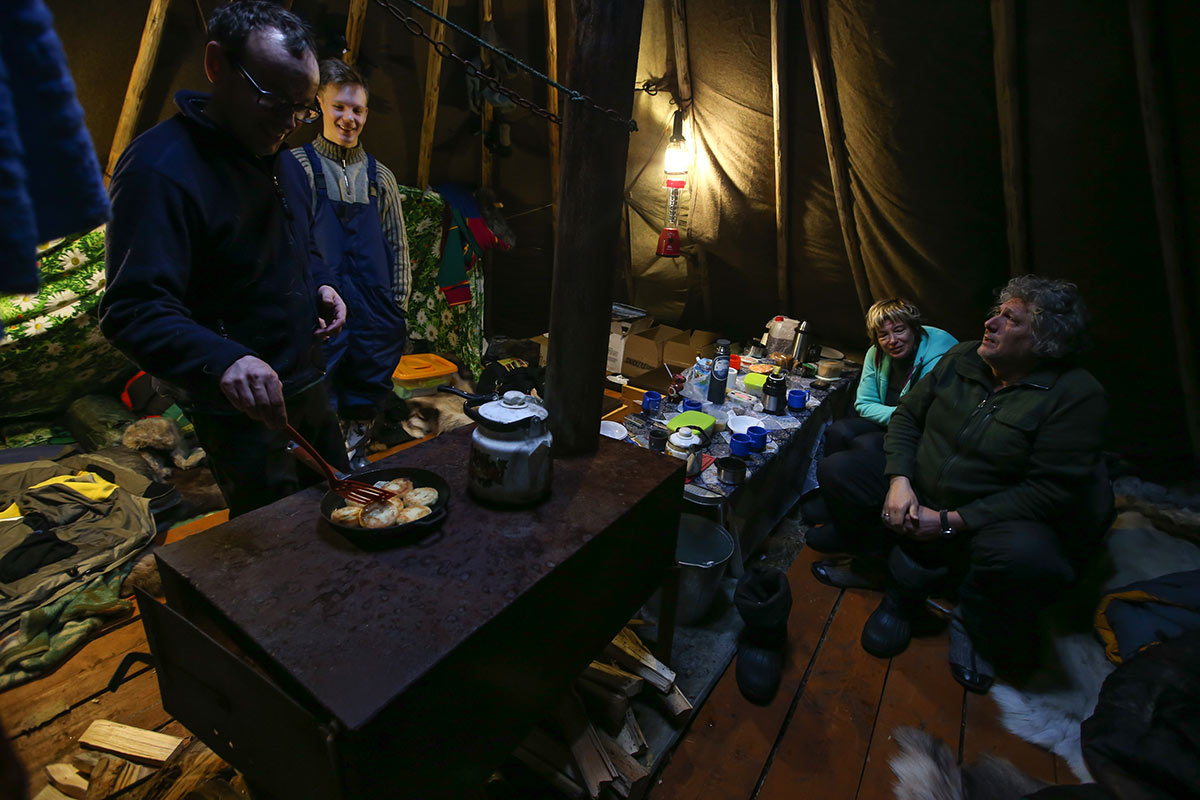 The Nenets kids have to grow up rapidly. At the age of 4, boys start to learn how to set harness and drive a sledge. Girls of the same age fetch water, learn to stitch, gather wood, and make a fire. 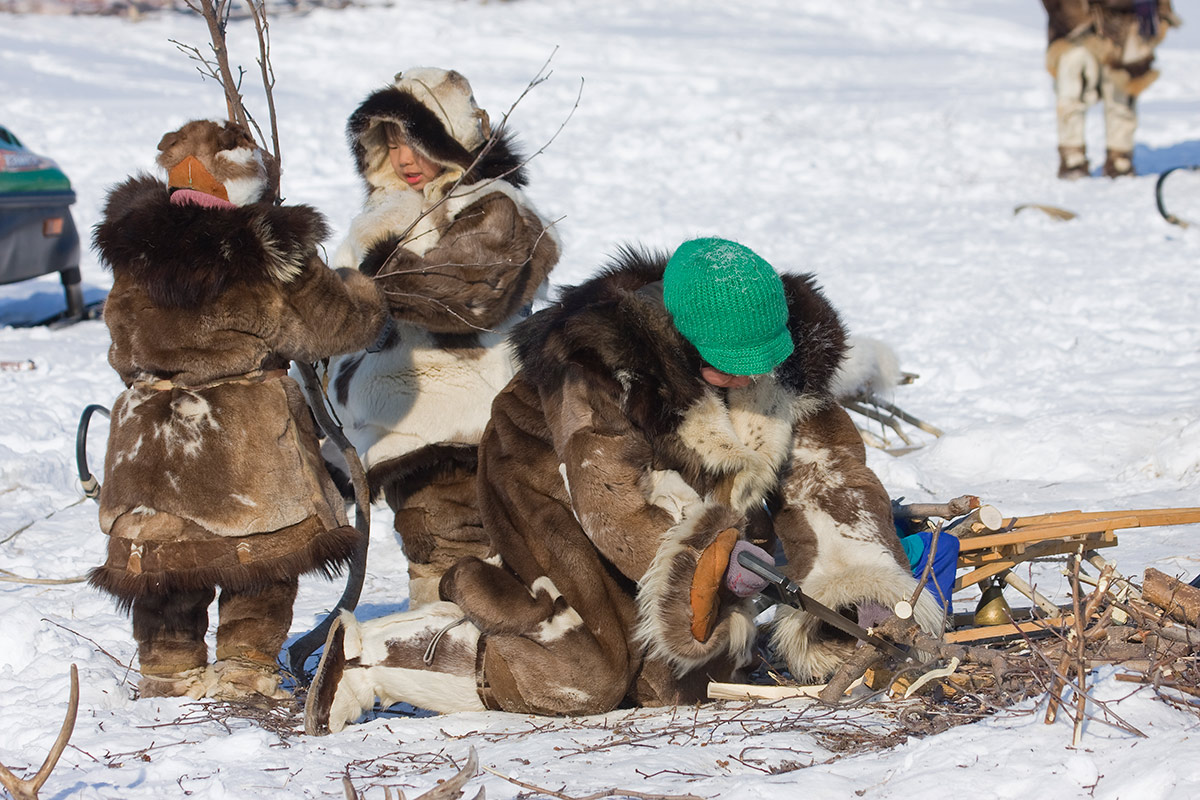 The concept of time is not usual as well. They don’t have hours and minutes. When the sun rises and a herdman drives a herd back to a camp, people wake up and say Tyto. It means “Deer are coming”, and the Nenets use it instead of “good morning”. The Nenets’ year is divided to two – winter and summer. If you ask a Nenets how old he is and the answer is 120, it means he is 60. The time point between winter and summer is called Po, which means “door”. Through this ‘door’ they travel from winter to summer and back.

Reindeer for eating and for honoring

Once you enter a chum, be sure you will be invited to dinner. This is a moment when you can taste a deer. The Nenets smoke, dry, and roast venison as well as eat a raw meat and even antlers. Fresh raw meat and blood of an animal provide the northern people with vitamins В2 and С. This is why they never suffer from scurvy. Take your chance and taste stroganina and reindeer blood pancakes. 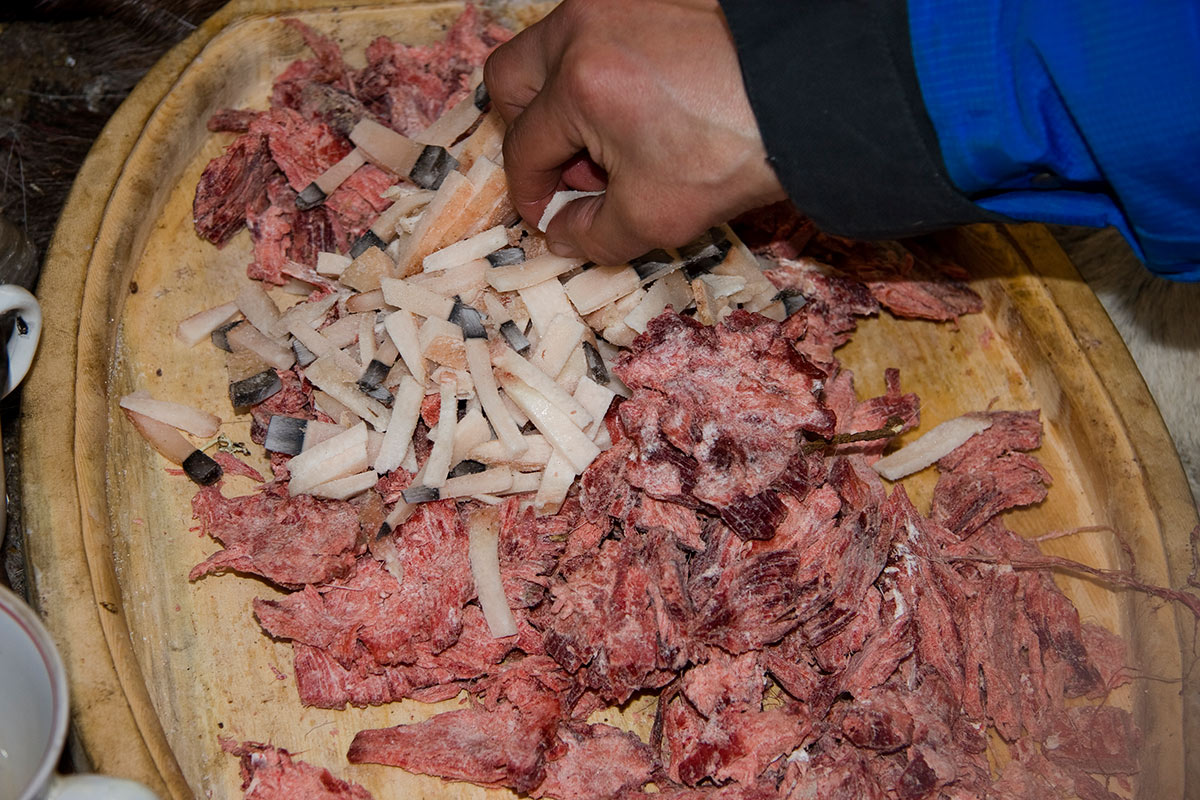 You might think that the Nenets just take advantage of the animal using it as a source of fur, skin and meat and as a transportation means. It’s not quite true. For the Nenets, there is no any conflict in using a reindeer for their basic needs along with honoring it. 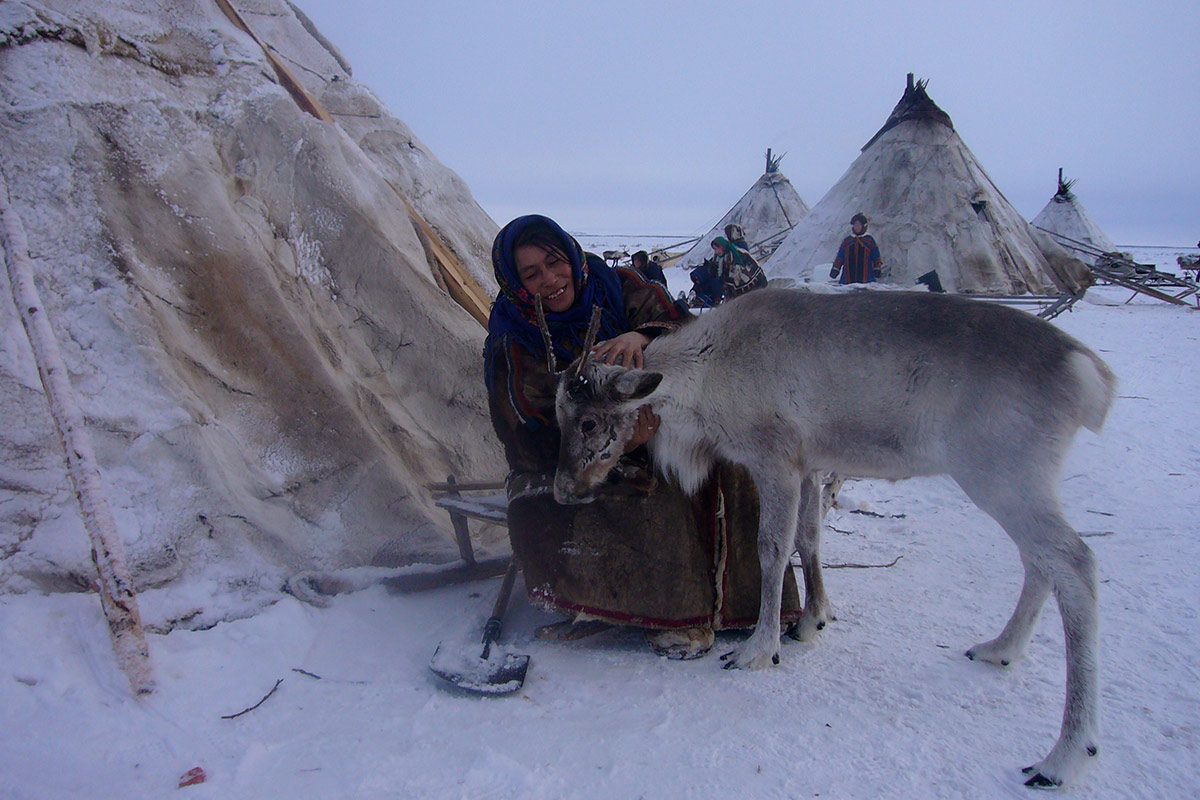 A deer brings luck – this is the local belief. It is customary to choose some reindeer from a herd to live in a chum together with people, such pets are called avkas. Avka is not just a pet, but also nanny if there is a small kid in a family. If you see an animal with red ribbons on its antlers, you are lucky to encounter a sacred reindeer. Besides the ribbons, the sacred reindeer usually has signs of sun and holy spirits cut out on its sides. These animals are not for eating.

Another privileged group is deer used for racing. You can witness a reindeer racing during the Reindeer Herder's Day. This festival is one of the highlights of the trip to Yamal. The celebration takes place in Aksarka village of Yamalo-Nenets Autonomous Okrug in April. This is a great chance to see the best of the authentic culture of the Russia’s Far North. More than that,  in our expedition style trip to Yamal you can learn how to drive a reindeer team and set a chum. By the way, the Yamal word is of the Nenets origin and translated as “edge of the world”. At this ‘world’s edge’, together with the Nenets nomads, you will be migrating across the Yamal Peninsula. Apart from the exciting adventures, you might be lucky to admire Northern lights, as the trip takes place during the best time to see the phenomenon. 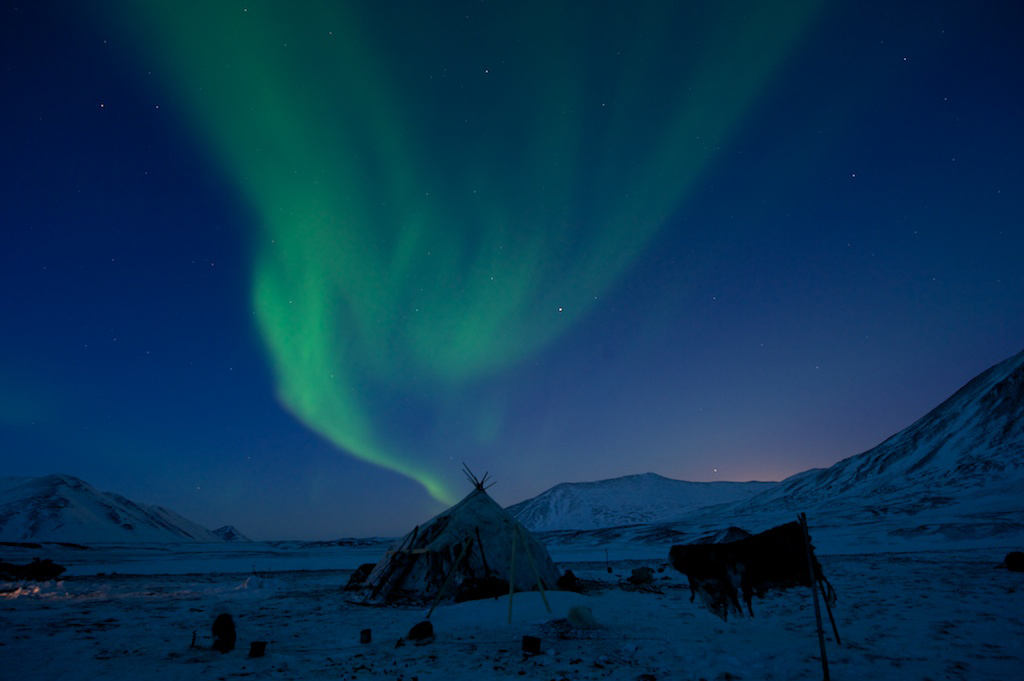 While the Nenets ethnic group is the most numerable of the low-numbered peoples of the North counting 45.000 people, the Chukchi community counts just 16.000. The Chukchis inhabit the Chukotka Peninsula which is Asia’s easternmost peninsula. This is where the Russian’s days start – the remote lands of utmost beauty with the 10-months winter.

The Chukchis got their name from the Yakuts and Russians in the 17th century; it means “rich in reindeer.” Besides the nomadic ‘deer Chukchis’, there are nonmigratory marine mammal hunter tribes, that live on the sea coasts. The Chukchis are known for their emotional character. They are very hospitable and good-natured. 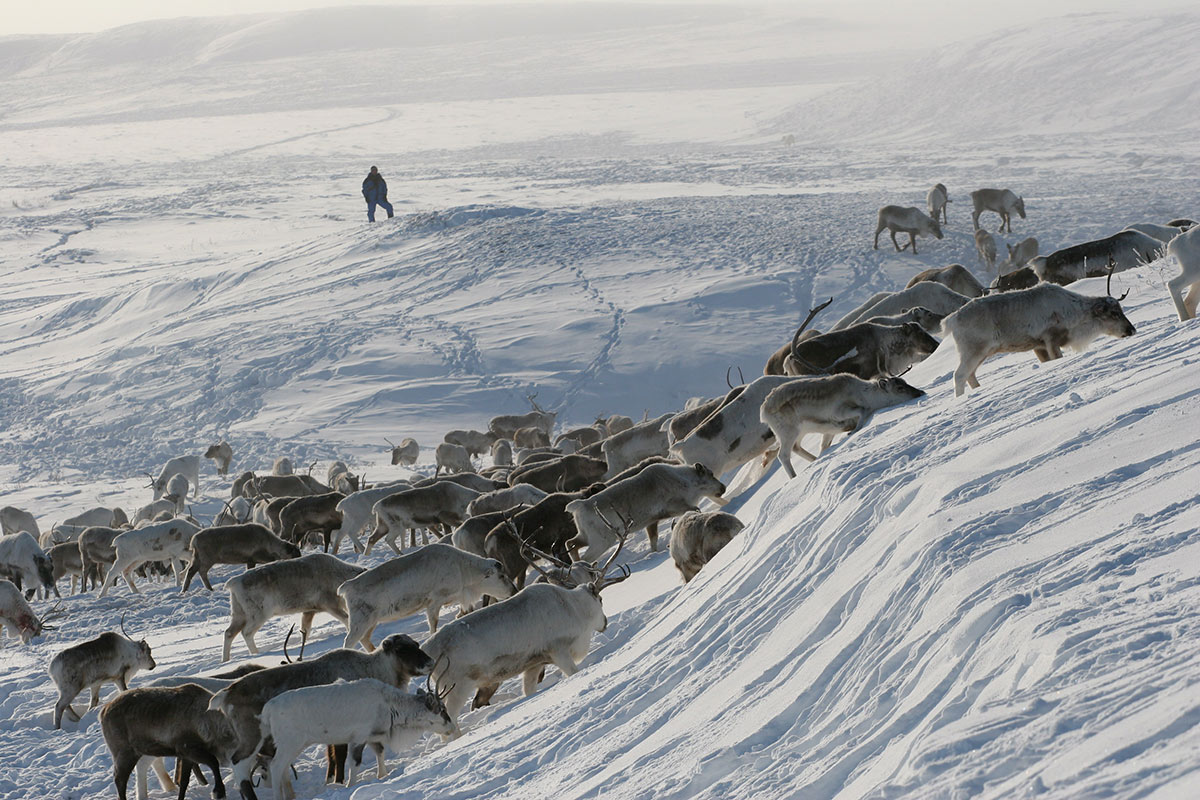 In our journey to Chukotka you have an opportunity to immerse into an absolutely different civilization. In a reindeer herders’ camp you will live in a traditional Chukchis’ tent yaranga. 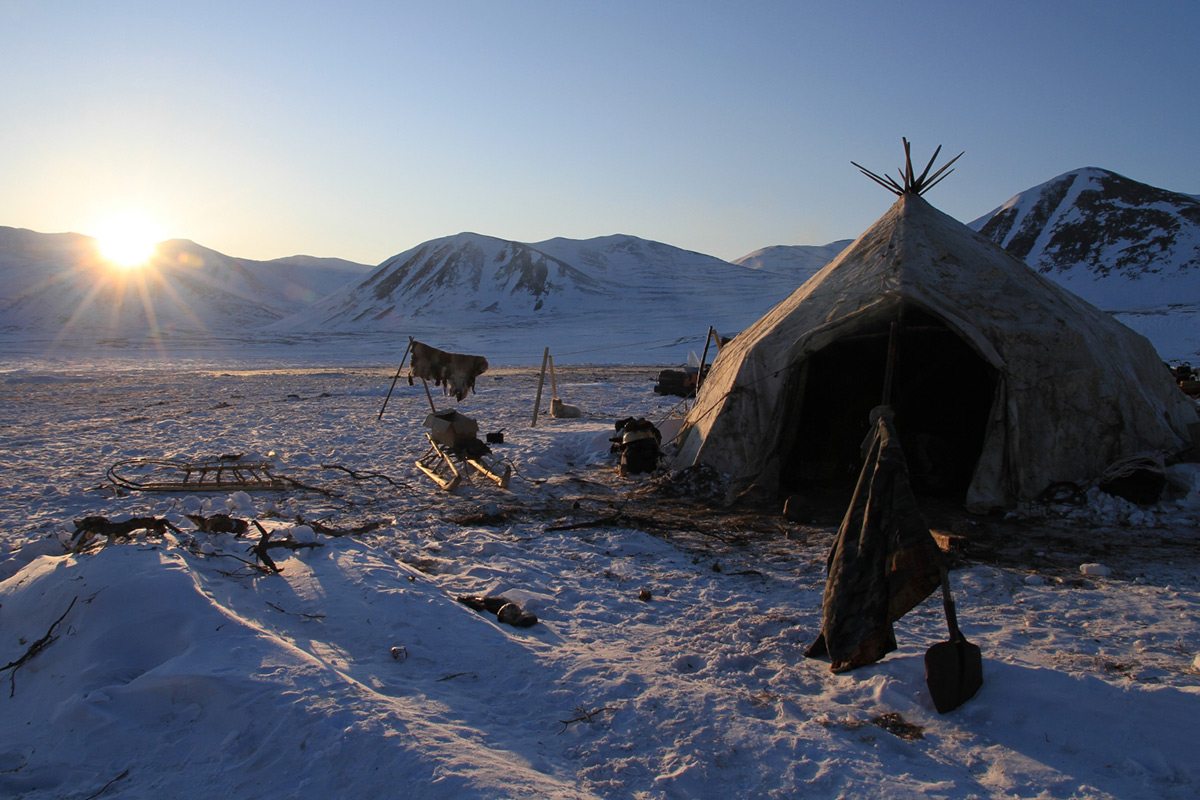 Like the Nenets’ chums, yaranga is made from deer hides with fur outside. When you enter the yaranga, you see fireplace in the center and sledges with all the necessary things on them. It is very warm in a yaranga. 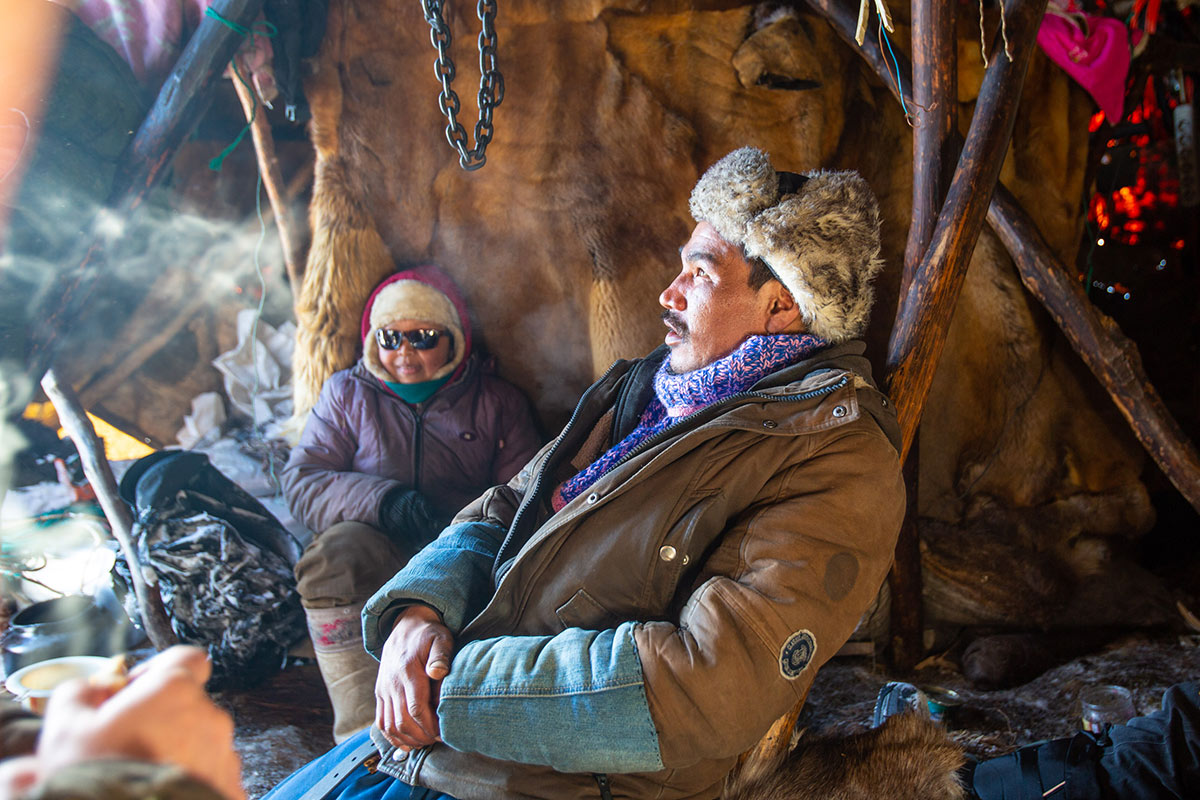 You will be treated with national meal – cooked or raw meat of whale, seal, and deer, as well as bark and leaves of a willow, sorrel, seaweed, and berries.

The national clothes are made from fur of a young deer. The Chukchis wear the inner layer with the fur inside, and the outer layer – with the fur outside. So the both layers fit each other tightly and provide frost protection. The clothes are decorated with patches. Some fashionists put an extra decoration on their outfits – long scarlet brushes, made of young seals’ skin. 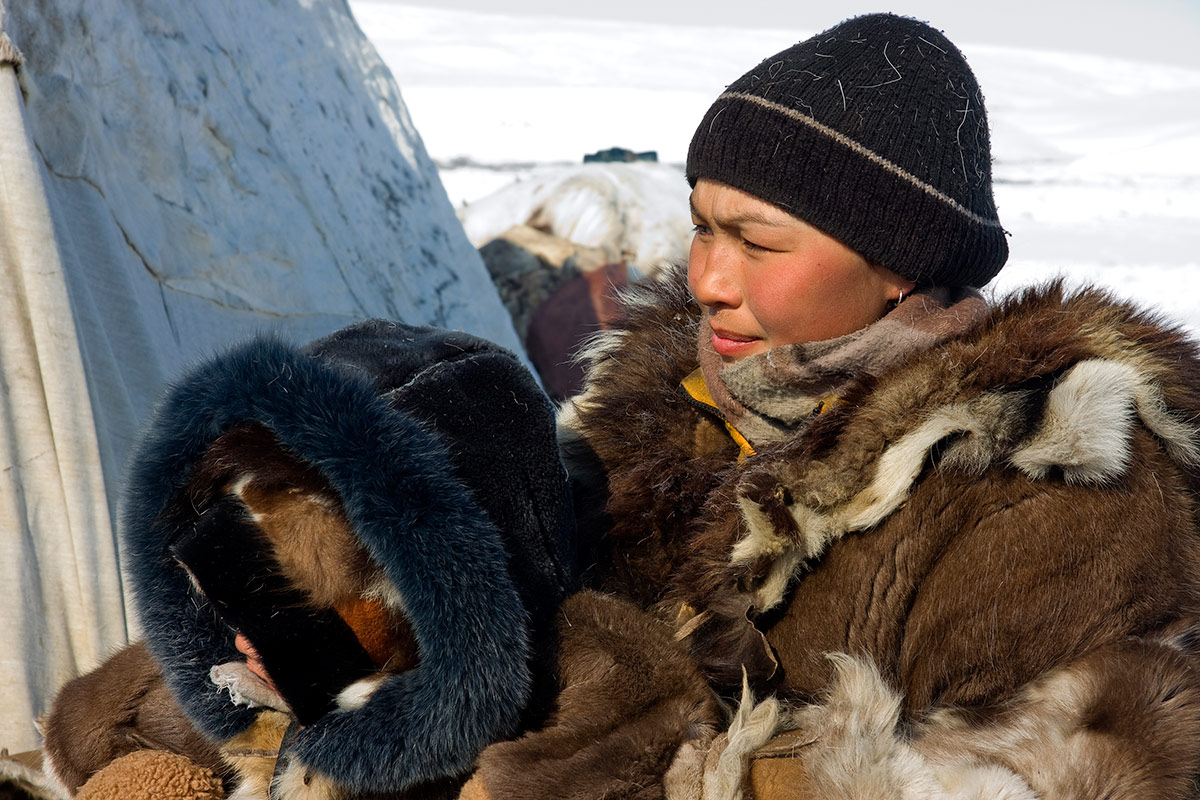 Raven that has created the World

The Chukchis’ religion is animism. They worship nature phenomena, water, fire, forest, animals – a bear and a raven, and celestial bodies – the moon, the sun and stars. They also believe in the evil spirits. According to their beliefs, it’s Raven of Kurkyl who has created the World, and the Space has been created by the northern animals.

“Have no clue how a human being can make these sounds” — this is a quotation of our traveler about a throat singing of a Chukchi female. Frail and beautiful, the girl was emitting fantastic sounds, strong and powerful: roar of a wild beast, cry of a seagull, groan of a deer. It was unbelievable how these sounds find room in such a delicate body. In some moments she was accompanying herself with a khomus – a traditional mouth harp.

The Chukchi dances are also an amazing show. Dancers are symbolizing a crane’s flying, a deer’s running, a seagull’s dancing, a swan’s wing waving. They do it so artistically, that it seems that the animals’ souls have transmigrated to the dancers’ bodies.

If you are interested in discovering the way of life beyond the Arctic Circle, see what we offer in Nenets Autonomous Area, Yamal, and Chukotka. All tour programs are exclusive and held in mini groups. If you're the company of friends, we can do any of the programs individually for you. For more info, call +7 (495) 104-64-36 or email us at go@russiadiscovery.ru

Prev
How to raise sales of winter footwear with a Baikal trip: the Salomon and RussiaDiscovery case
Next
Russia in winter — 7 best things to do
View all articles (40)
Sending the letter
Callback
Get inspired to travel