Snowmobile Journey in the Ural Mountains

In February 2018 our tourists from Ireland have reached Manpupuner — mysterious rock formations in Ural. After the expedition Keith McDonnell, one of the participants of the extreme journey, wrote an article about the trip. 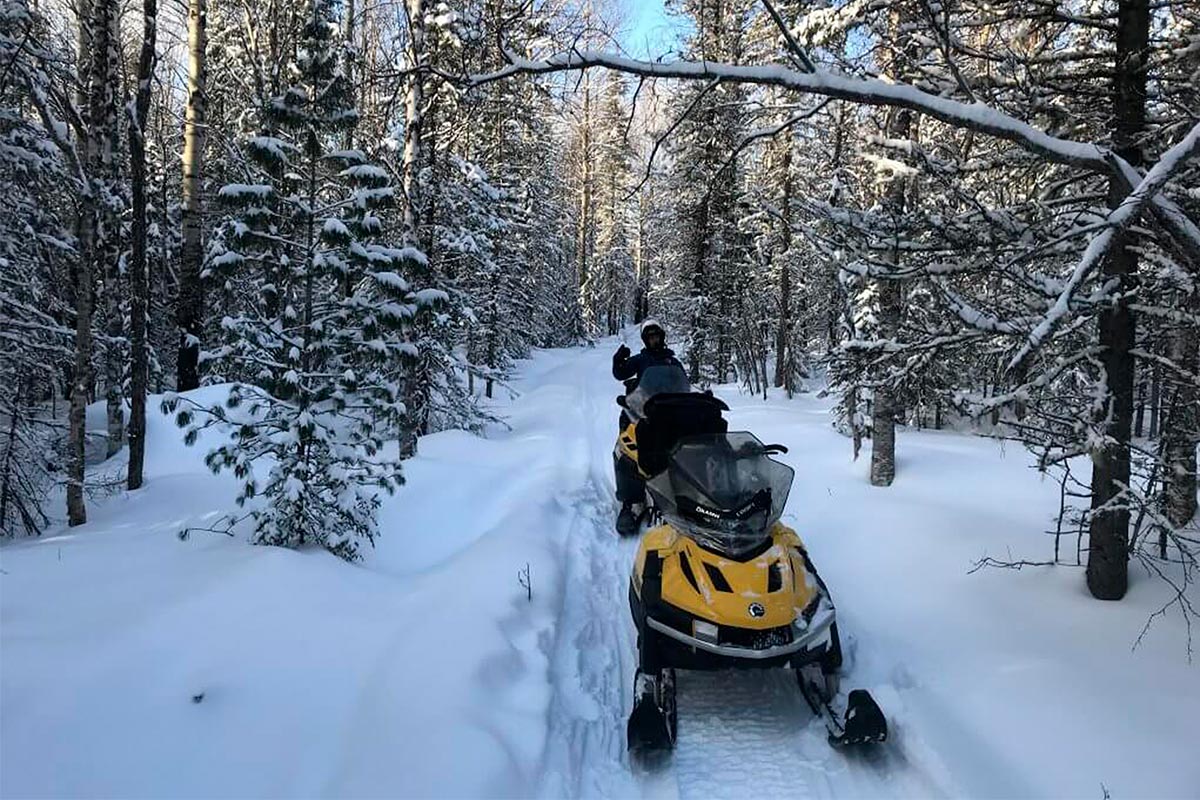 “Day one, we were looking at the maps before getting on the snowmobiles and there was just nothing near you for hundreds of kilometres. It was just the most incredible thing.” – Keith McDonnell.

The first ever Irish team has successfully completed an expedition in the vast wilderness of Siberia. On the first week of February 2018, Keith McDonnell (41) who runs Extreme Ireland, along with Des Mulvihill, Ollie Greene, Gary McCann, Darren Smith and Terry Lambert set off on a gruelling expedition to reach the remote and striking Manpupuner (Manpupunyor) rock formations, deemed one of the Seven Wonders of Russia. They were the very first team this year to enter the heart of Siberia to go in search of the iconic rocks.

Unless you’re extremely savvy with Russian geography, you’ll more than likely never have heard of these unique pillars. But after seeing a picture of them, you won’t forget them in a hurry. Known locally as the Seven Strong Men, they could not fail to impress. Standing at 30 – 42 metres tall against a backdrop of nothing but stark, uninterrupted snow and sky, they are an awe-inspiring sight. Local legend has it that they are the remains of seven Samoyed giants. The story goes that they were on a forced march through the Urals on a mission to destroy the Vogulsky people. When their Shaman caught sight of the holy Volgulsky Mountains he let go of his drum causing all seven giants to freeze to the spot.

It was no picnic for the Irish team to reach these Russian giants. They battled extremely harsh conditions, low temperatures, and 4+ft of fresh snow on their off-road snowmobiling adventure. Even to reach the start line was a journey in itself. Travelling all the way from Mullingar to Moscow, they then drove for two hours across Moscow for a domestic flight East. Followed by a 650km drive in the back of a Toyota Hilux before beginning their epic 325km snowmobile journey to the rocks of Manpupener. 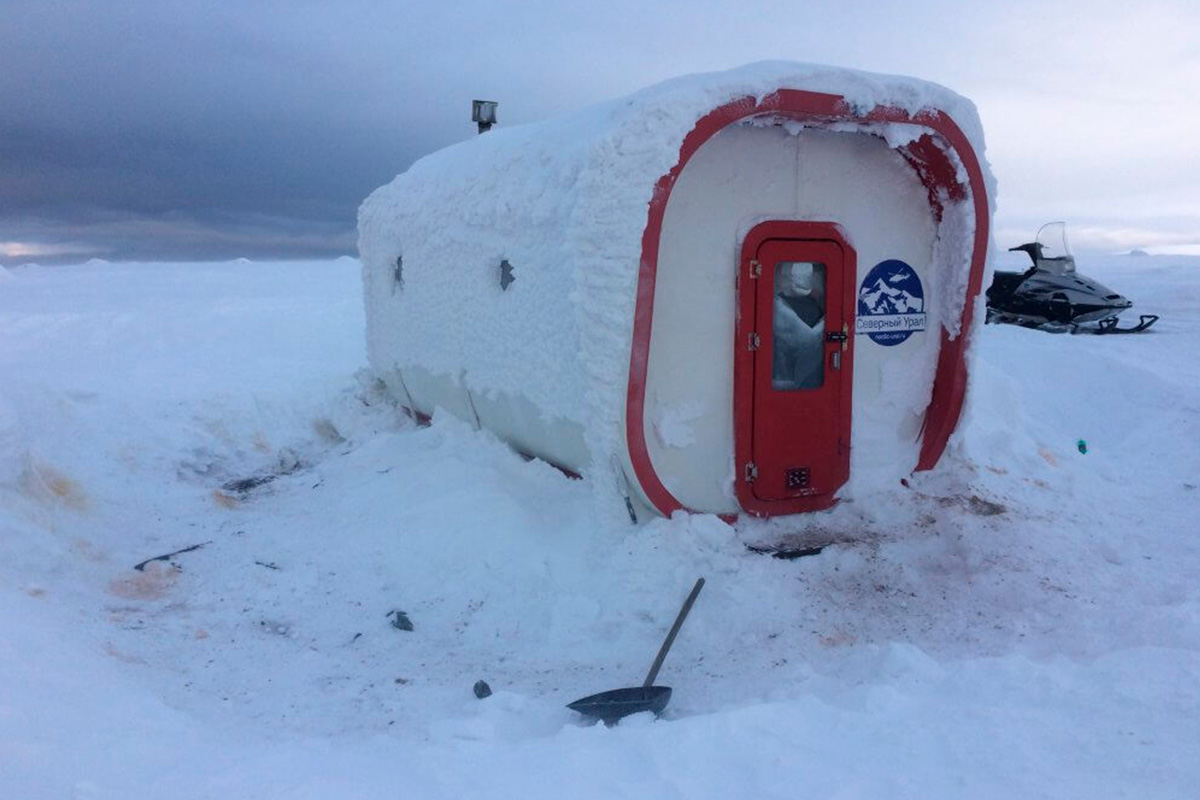 “We travelled over mountains, across frozen rivers and through forestry for 12 hours a day. Temperatures were -20 °C on average and – 32 °C on the day we reached the rocks,” says Keith. “We had one day where we had a six-hour whiteout and the snowmobiles were constantly getting stuck going up the mountain. We ended up having to make an emergency stop in a metal shed (a Russian national park cabin) that was on the side of the mountain where we stayed for the night. The next day we headed for the rocks, it was an 18-hour day.”

Along the route, they stayed in the villages of local tribes. “They live off the land, which is pretty incredible. Their main diet is elk and deer and they don’t speak any English obviously, so we would try to barter with them for different things. We ended up carrying a quarter of a deer around with us for food.” 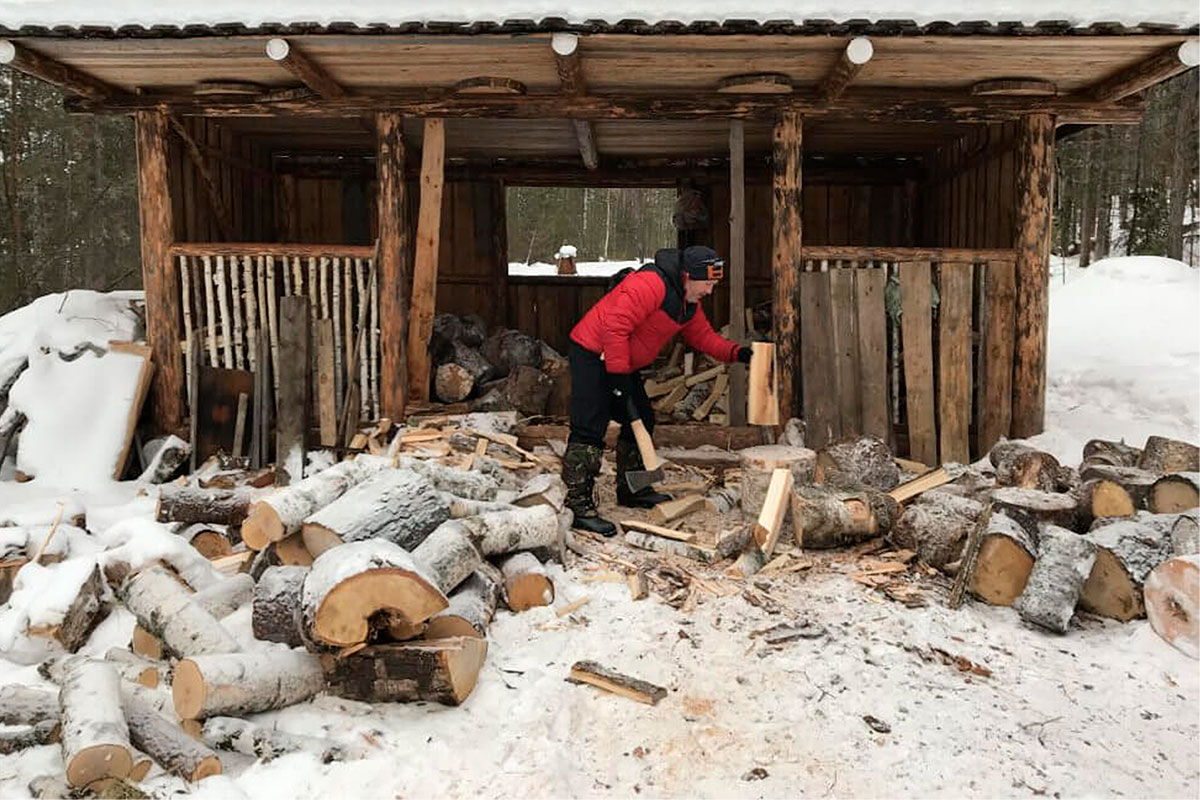 The elements were by far the biggest challenge for the group and having the right gear was essential. “You can’t have any part of your skin exposed during the day. We wore a lot of Merino layers, socks, leggings, base layers, two pairs of gloves and then mittens over them that were 100% windproof. A thermal layer and an outer jacket above that and a balaclava and helmet. It’s all about weight so the clothes we put on us the first day is what we wore for the duration of the trip.”

“It is pure emptiness and wilderness. You’ve never seen anything like it. It reminds me of the Antarctic, where you’re moving and you see a mountain in the distance and you could be moving towards it for two hours and it’s not getting any closer to you.”

Snowmobiling requires a surprisingly high level of fitness, as you’re standing up on the snowmobile all day. Keith says, “On a scale of zero to 10 fitness, you’d have to be at seven or you’re not going to enjoy it. We were in bits at the end of each day. The snowmobiles would get stuck a lot and a lot of time you were on your own. You had to have the strength to be able to lift it out yourself so you do have to be physically strong.” 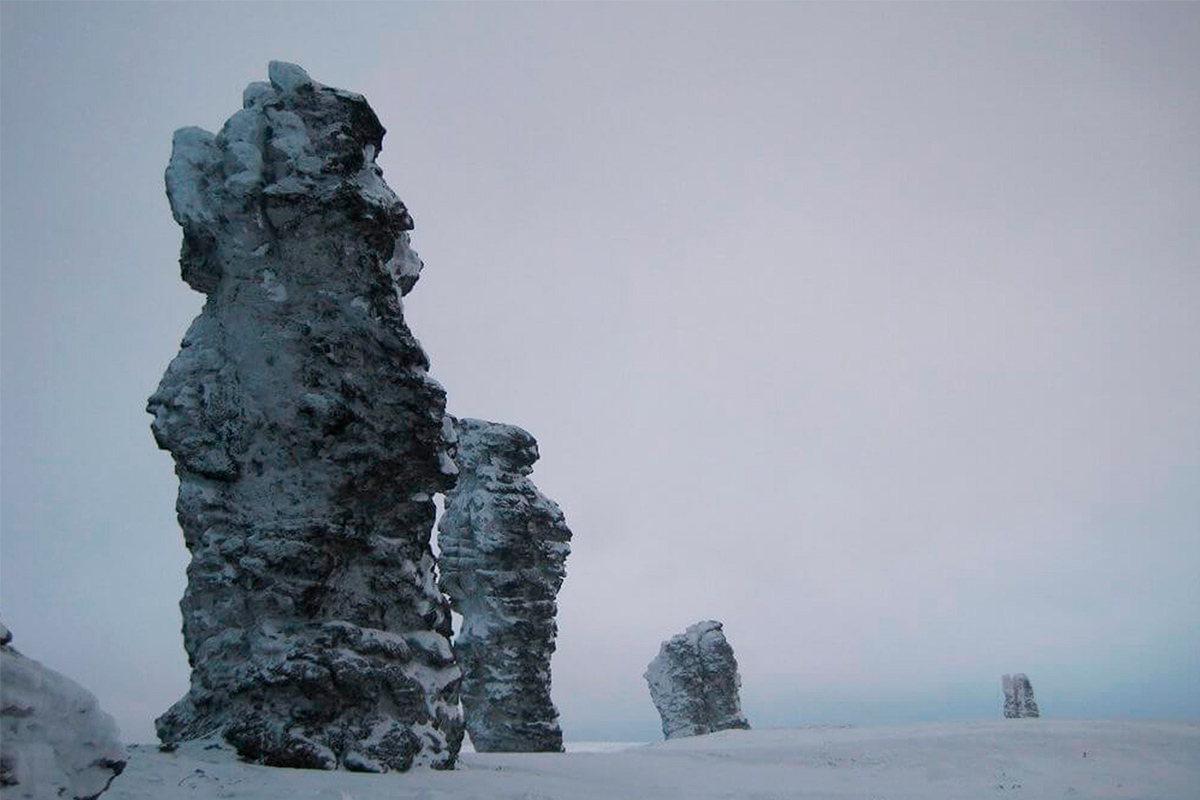 You also have to be quite mentally strong. “You can’t speak to each other so you are in your own head for the whole day. You have to concentrate on the riding which helps keep you entertained. It’s not like snowmobiling in Sweden or Norway where you are on a flat, designated terrain. There are no trails and you’re constantly weaving in and out through forests. You could be going through 5ft of snow. Aside from that, it is pure emptiness and wilderness. You’ve never seen anything like it. It reminds me of the Antarctic, where you’re moving and you see a mountain in the distance and you could be moving towards it for two hours and it’s not getting any closer to you.

“But the more miserable the better, I say! It was a really special trip, just a group of lads off on this epic adventure. It was a such a laugh with a lot of sing songs on the Siberian Jaw harp. We tend to do a trip every year. Last year we climbed the north face of Mount Damavand in Iran, the year before we traversed South Georgia island in Antarctica tracing Shackleton’s journey. We’ve also done numerous Alpine trips and next year, we will be motorbiking to Timbuktu in Mali. 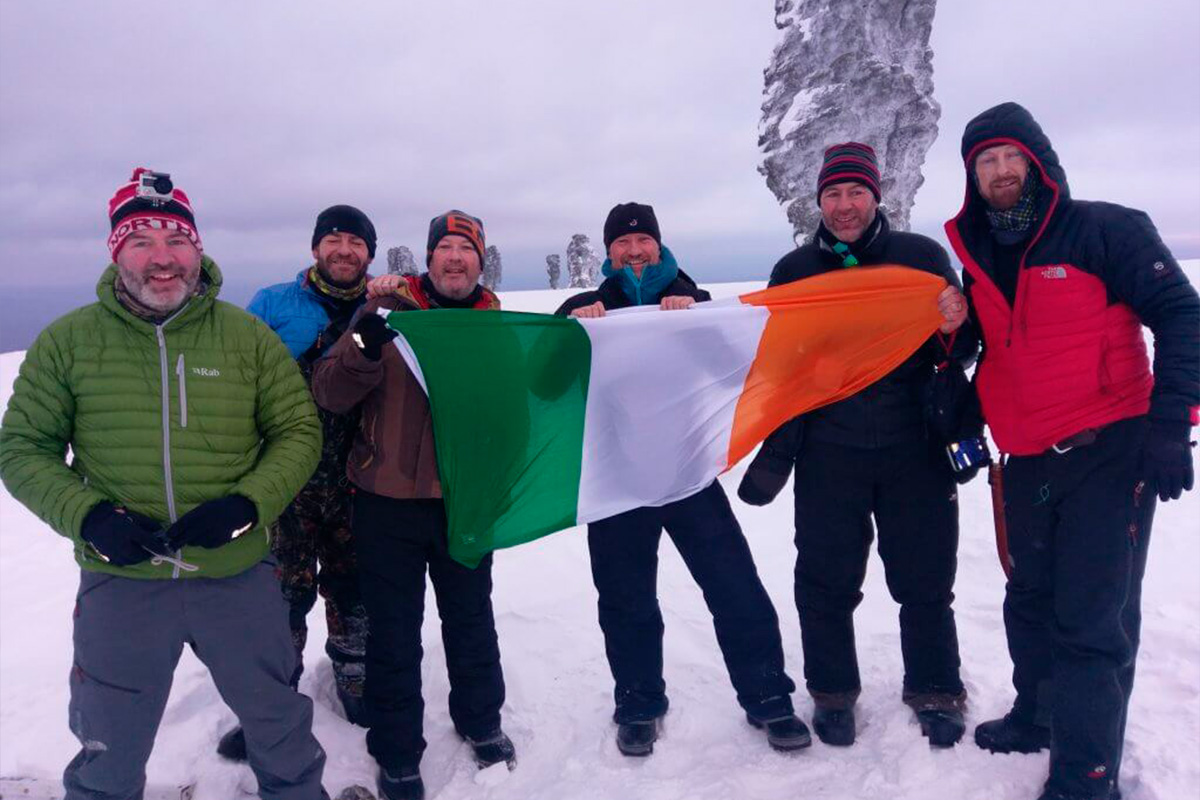 “It was everything you could want from a journey. It was physical, it was mental and it was all about a group of friends working as a team. And that moment we finally arrived at the rocks was just incredible. The rocks are the most exposed place on the mountain. Siberia is all quite flat and then this mountain just rises up in front of you with these rocks on it. Nobody can explain geologically why they are there. And for hundreds of kilometres you have no rocks at all and then there are just these pillars standing up. Its no wonder the tribes worship them.”

Would like to explore Russia as well? Check our collection of travels — there more than 20 destinations there. Not easy to make a choice? We will be happy to help you — email us at hello@russiadiscovery.ru or call +7 495 125-28-08

Photos are taken from the article of Keith McDonnell

Prev
Knowledge Base: Karelia Russia
Next
TransKamchatka: the End of the Expedition
View all articles (40)
Sending the letter
Callback
Get inspired to travel