Last summer the editor of RussiaDiscovery Margarita Dyakova visited Altai. The tour was announced as an active trip with hiking, rafting and caving. Rita worried if she was physically fit enough for the activities. However upon returning she said that the discovering of Altai should be exactly like she had had. Let’s find out, why she thinks so: 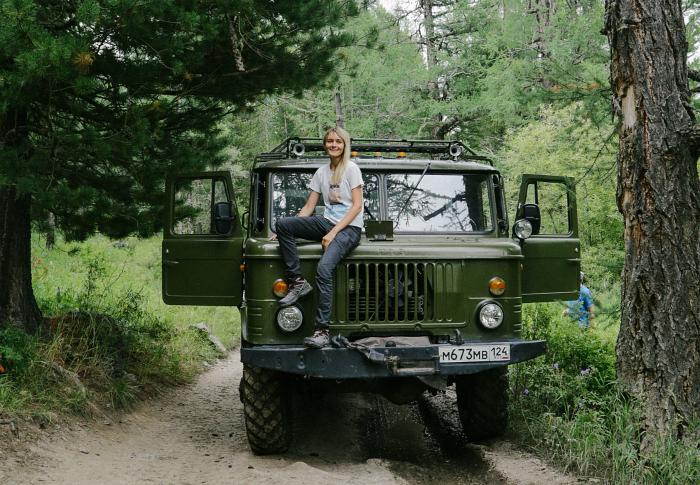 "The Altai’s area is huge and very different: taiga, steppe, lakes. To immerse into all the beauty of these places, you need walk along the mountain paths washed away after rain, ride on shishiga (a Russian nickname for the GAZ-66 4x4 off-road military truck used as a cargo vehicle for motorized infantry of the Soviet Army), go rafting along at least one of the Altai rivers, and get to a cave using ropes. 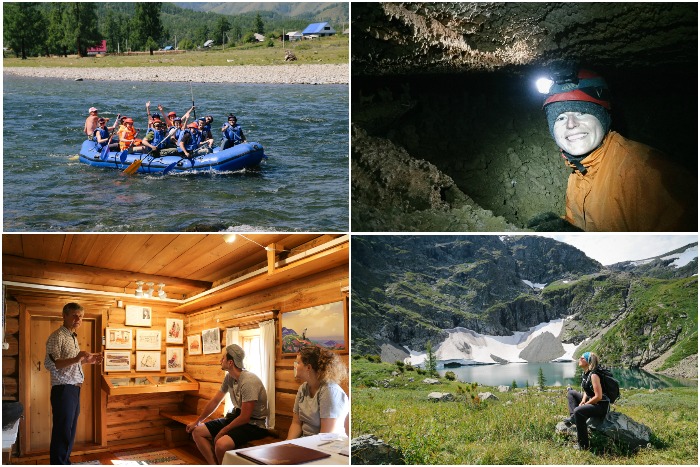 Before the trip I worried if I was fit enough for the activities, but everything went fine. In my regular life, I sit at a computer all day and don't do any fitness. All my exercises are walking and cycling. But this was enough to feel comfortable during the journey. 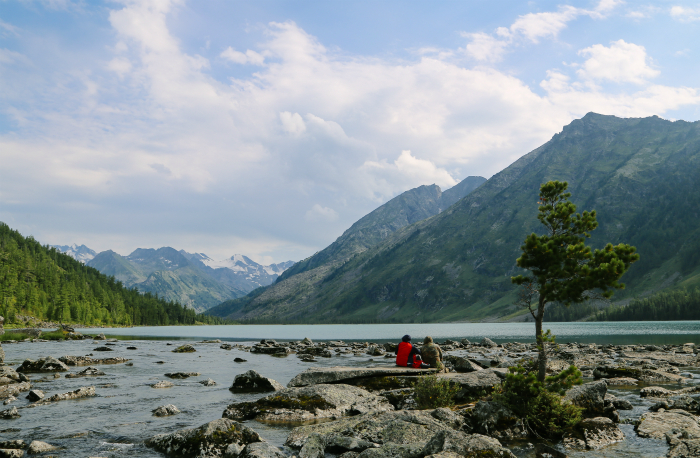 Now let me tell you more about the activities and places included in the program. 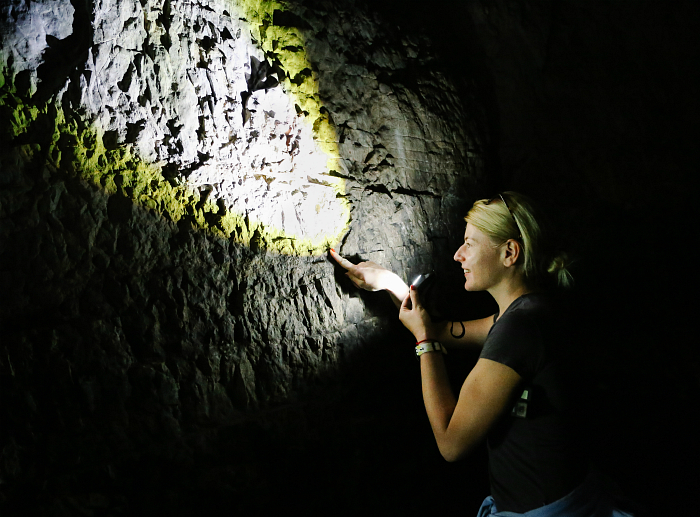 I first have heard about the Denisova Cave from the book "Sapiens: A brief history of humankind" by Yuval Noah Harari. The author writes: "In 2010 another lost sibling was rescued from oblivion, when scientists excavating the Denisova Cave in Siberia discovered a fossilised finger bone. Genetic analysis proved that the finger belonged to a previously unknown human species, which was named Homo denisova".

While reading the book, I was impressed that the discovery was made in Russia. At that time I didn’t even expect that the details of this great finding I would learn later right on the spot.

As for the significance of the archaeological find, the Denisova Сave is compared to the Egyptian pyramids. To learn more about the Denisovans, watch National Geographic's documentary "Sex in the Stone Age." 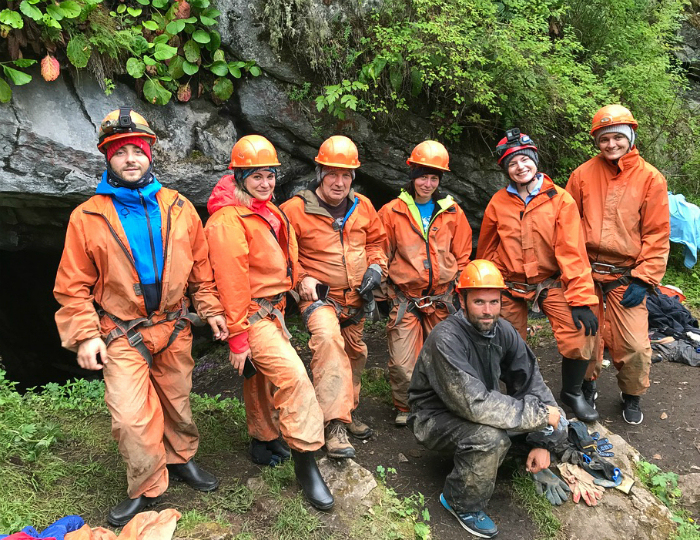 Unlike the one-hall Denisova Cave where you can get to by going up the stairs, the six-hall Muzeynaya (Rus. for Museum) Сave is located underground at 33 meters depth.

To get into the cave, you have to go down using ropes. The passages between the cave’s halls are extremely narrow, so in some places you need crawl on all fours and roll over like a sausage.

First I lost my courage, as I had never been in such the caves before. But once I was out, I felt like a hero and realized that it was worth doing. The main thing in this adventure is to listen to the guide and do everything he says. 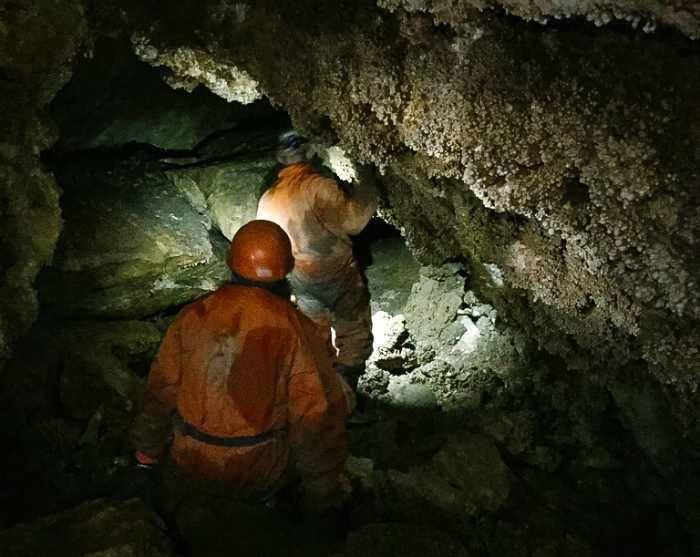 The breathtaking route is not the only attraction of the cave. There are beautiful stalactites and stalagmites of incredible forms: tubes, cones, crystals. Another interesting thing is drops looking like they are ready to fall down, but not falling for years because of being saturated with calcium. 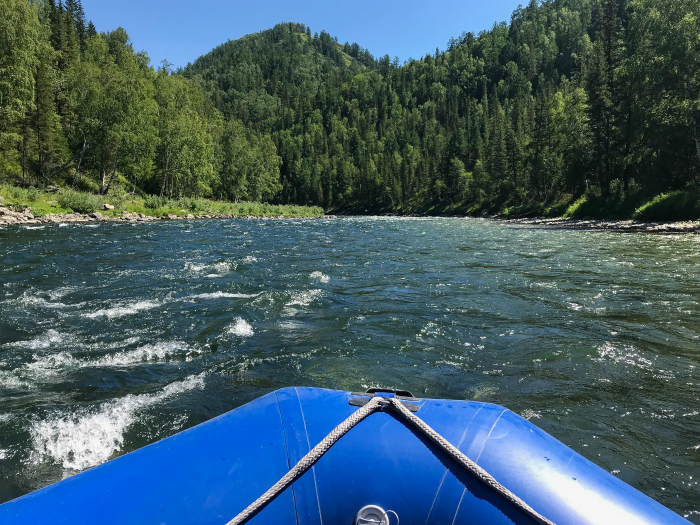 There are not just many rivers in Altai, there are hundreds of them. They are calm on the plains, and featuring rapids and cascades — in mountain regions. This is a Mecca for rafting enthusiasts, many rafting forums and international competitions are held here.

Our program included a simple rafting on the Koksa River. This is a great option for those who have no experience — you can sit in the middle of the raft and give commands, as if you are the captain :) However in some places the river has rapids, so you have to paddle actively and get out of the shoal.

So, it was a cheerful adventure both for the new paddlers and the experienced ones. Just imagine the picture: sunshine, splash water, dark green forest and hills around, black storks on the banks ... Rafting is a great way to get acquainted with another side of the Altai. 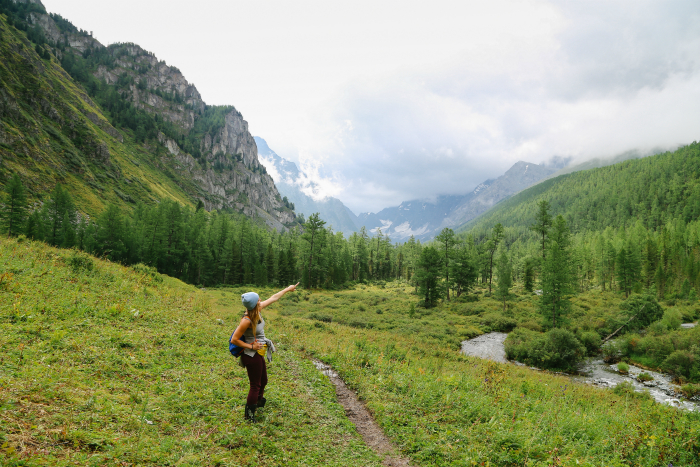 We had several hikings during the journey: to the Shinok Waterfall, to the Krasnaya Mount (Rus. for "Red") and around the Multinsky Lakes. All the hikes were comfortable, without need for carrying heavy backpacks, and in the evening we returned to the base for overnight.

A cascade of waterfalls on the Shinok River is a fascinating view. The upper waterfall is one of the largest in the Altai Mountains. It is 70 meters high, that is about the height of the 23-storey building. The lower waterfall is not so high, but it is considered to be a place of power. It looks enchanting — while looking at the water splashes, it seems that you are dissolving in them.

On the return way I had seen the most beautiful rainbow in my life. The rainbow was so wide, that the camera lens couldn’t capture it. And it was so bright, that you could see all the seven colors. The rainbow’s ends went straight into the ground, so close that it seemed I could touch it. 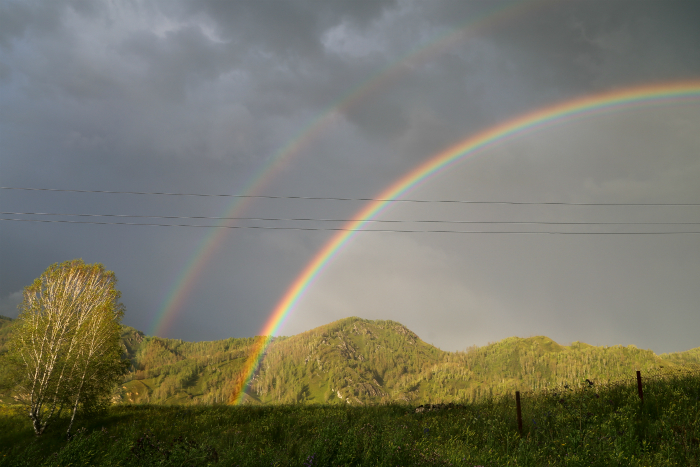 The Krasnaya Mount’s top offers a panorama of three mountain lakes at once. The lower lake is shimmering with bright green and turquoise colors. Two upper lakes draw the eye by small drifting icebergs broken off from the snowfields. 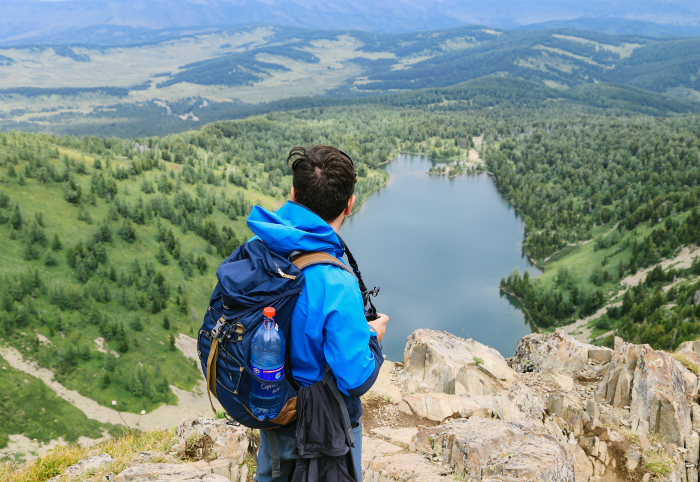 In clear weather, you can see Belukha — the highest mountain in Siberia.

Views change each other while walking to the mount: cedars and larches, Alpine herbs, flowers and dozens of streams running from the melting snowfields.

The Multinsky Lakes is a “must see” place in Altai. Here you are really off the civilization without Internet access, surrounded by mountains and taiga. There are two ways to get there: on foot or by GAZ-66 off-road vehicles. 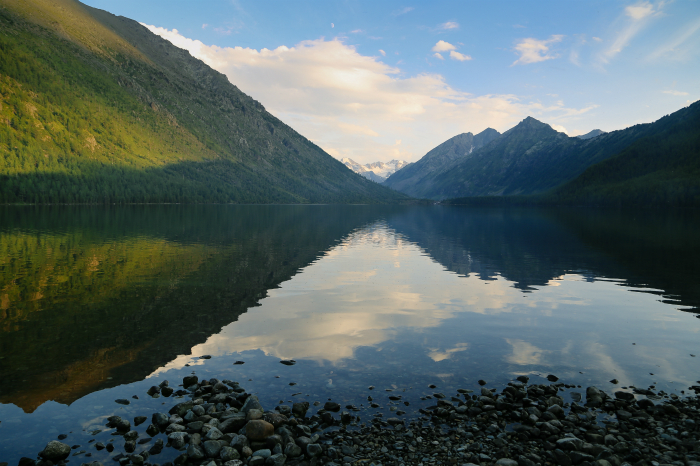 When you are sitting on the lakes’ bank, listening to the wind, gazing at flies flickering in the sunlight, seeing each pebble on the bottom — you feel that everything inside you calms down. 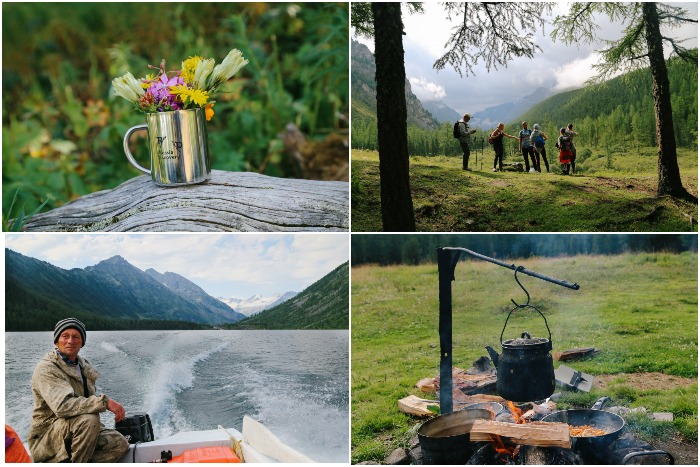 We had 2 hiking routes: 6 km from the Lower Lake to the Middle Lake and 20 km to the Kuyguk Mountain Lake and waterfall.

The Museum of the Old Believers is located in the village of Verkhny Uymon. The village was founded in the XVII century by people who had refused reforms of the Russian Church in 1653 aimed to establish uniformity between Greek and Russian church practices. The Old Believers had to move to Siberia.

The founder of the Museum of Old Believers, Raisa Pavlovna Kuchuganova, gives a tour by herself. She told us about the Old Believers, repressions and war. 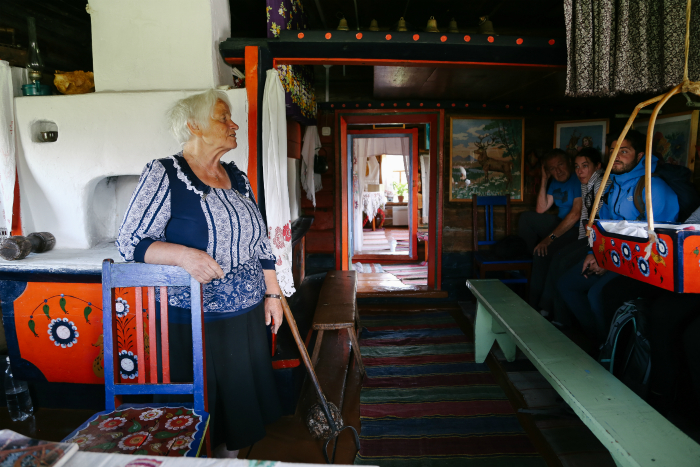 Raisa Pavlovna is a living legend indeed. She had been collecting the Museum’s fund for more than 40 years. To learn more about it, watch the documentary "Altai Guardians".

The Roerich Museum is also located in village of Verkhny Uymon. Nicholas Roerich and his family stayed here during their Central Asian expedition. For Roerich, Altai was interesting as the center of Eurasia, a place where East and West cultures merge. He also considered the Uymon Valley to be a place of power and dreamed of building Zvenigorod here — a city of the future that would become a scientific and educational center. 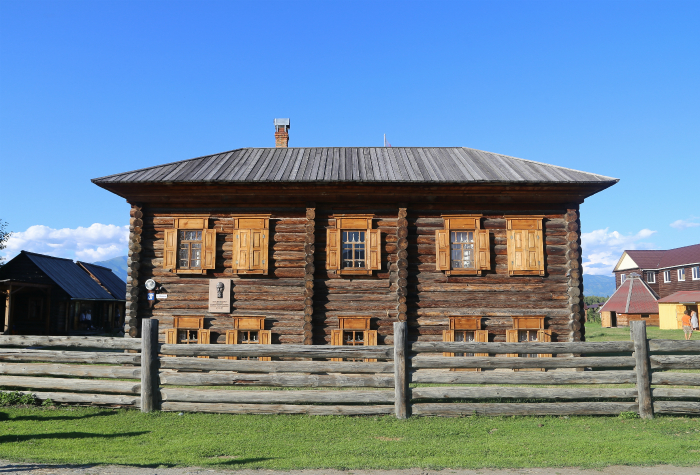 Having experienced different activities in your first trip, you can choose how to continue your further discovering of Altai — on foot, by car or by rivers. There is no doubt that you will want to come back to Altai, because everything becomes simple things here.

Thoughts of work, bills and everyday fuss disappear from your mind. They are replaced by other thoughts: not to slip on a path, to dry your shoes before another hiking, and to take a deeper breath of clean air. And you finally feel yourself here and now. 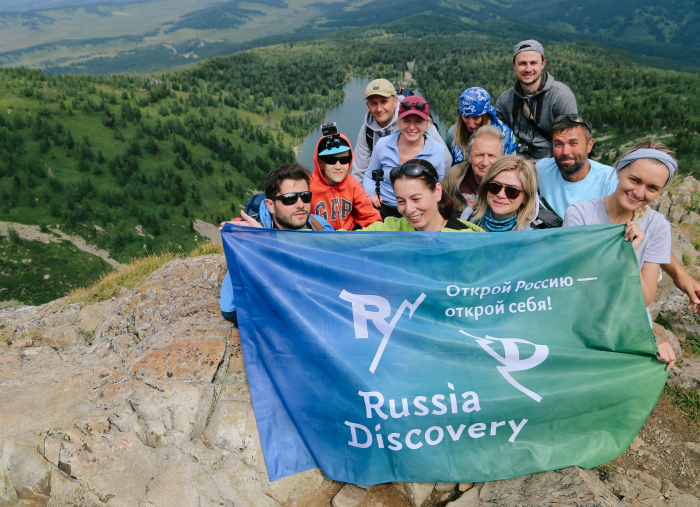 See our trips to Altai. Choose the tour that Rita has undertaken or any other. We will be glad to tell you the details and answer all your questions, just call +7 (495) 800-8-800 or email us at go@russiadiscovery.ru

Prev
World heritage sites in Russia
Next
Like Nothing on Earth: Watching the Whales
View all articles (40)
Sending the letter
Callback
Get inspired to travel