Ethnic expedition and animal-watching on Yamal

Yamal, a peninsula in the Northern Russia, is an area of permafrost. Very few can adapt to such harsh conditions. However, the Arctic is home to both humans and animals. On this tour, you can become a real polar nomad for a while, feel the freedom of the tundra and see the rare Arctic endemics — musk oxen.

Hard. Professional training and perfect physical fitness are required. The level involves climbing to the tops of the mountains (above 3000 meters), freeriding and North Pole diving.
Age
from 16 y.o.
Group size
to 5 person
Duration
8 days

Here are our new expedition tour. For several days you will leave the civilization to fully immerse into the life of the Yamal nomads. You will live in the family of a Nenets reindeer breeders and take part in their daily life. Living in traditional chums in the middle of the winter tundra and tasting traditional cuisine is waiting for you on this journey. It will be a real digital detox and an amazing experience of living in the Arctic.

This tour is an opportunity to visit the Gorno-Khadatinsky Nature Park, where a population of Arctic musk oxen is being restored. These rare animals living in semi-wild conditions become the object of interest of wildlife photographers from all over the world.

5 reasons to join this unusual journey:

Note: for your group of 2 or more people we can organize this program on any other dates, see details in the "Common Questions" section. 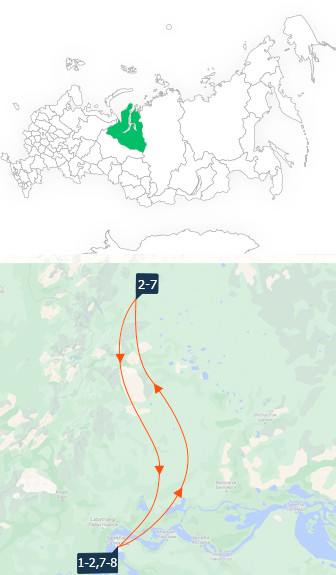 The journey begins in Salekhard, where you should get to on your own on the first day of the program by 10 am. We are ready to assist with the purchase of tickets. If necessary, leave a comment in the application.

After meeting at Salekhard airport you will be taken to the hotel and accommodated in double rooms. After lunch at the hotel restaurant, you will take a bus tour with a guide. There you will see the main sightseeing of Salekhard:

•‎ a ceremonial crossing of the Polar Circle and awarding of the personal certificates. The “66th parallel" stele is a geographical feature of the city, as the only city in the world located on the Arctic Circle

•‎ the "Mammoth" sculptural composition, which is dedicated to the ancient inhabitants of the North

•‎ the Victory Park – a large-scale cultural and historical complex, where military equipment of different eras is represented

•‎ the Church of the Holy Apostles Peter and Paul, which was designed by the German architect Gottlieb Zinke. This is the only surviving religious building of the 19th century in the city and the region, reflecting the history of the spread of Christianity in Siberia. It is an architectural monument of regional importance.

You will also visit the Shemanovsky Museum Complex – the main museum of Yamal. There a unique permafrost-preserved mammoth Luba is exhibited, which actively travels around the world and attracts queues of thousands in the leading museums of London, Sydney, Hong Kong and other cities of the world.

The Ethnographic hall presents the culture and life of the indigenous peoples of the North, and in the Hall of archaeological finds, you can learn the history of the famous first Russian polar city – Mangazei.

After the tour, you will return to the hotel, have dinner at the restaurant and rest.

After breakfast at the hotel, you will travel by TREСOL all-terrain vehicle heading to a reindeer pasture. The way will take 7 to 10 hours, depending on the state of the road and weather conditions.

The route goes along the territory of the "Gornohadatinsky" national park, which is a specially protected area. You will pass registration at the control point of the reserve. On the way, you will be given lunch boxes for snacks.

After arrival at the camp, you will get acquainted with the family and be accommodated in the “chum” – reindeer herders’ tent.

On these days you will live with the Nenets reindeer herder family and take part in their daily life. You will have the opportunity to learn the basic rules of living in a tent, how to tackle up a reindeer, harness it to a sled and steer it.

You will get acquainted with the way of life of a modern woman worker in the Yamal tent. The woman’s responsibilities are no less important  – she builds the house for the whole family. Building the house means to dress, process and cure reindeer skins to make the cover for the tent. Arranging clothes and shoes for the whole family from head to toe is also a woman's job. Much depends on whether the clothes made of reindeer skins will be warm and comfortable: the 40-degree frost in the tundra is not to be trifled with.

You can go to the reindeer herd, feed tame reindeer with bread, take photos with reindeer, ride the reindeer sled. As an option, ice fishing at a nearby body of water can be arranged, if it fits the schedule of the family. On all the days of your stay in the chum, you will have three meals a day with national cuisine.

If necessary, daily trips to the habitat of Arctic musk oxen will be organized on snowmobiles with trailed sleds/nats. More than 20 years ago, the first musk oxen were brought to Yamal. Their breeding was successful, and now these Yamal animals live not only here, but have also migrated to other Arctic regions, such as the Taimyr.

Muskox have inhabited the territory of modern Yamal since ancient times and were neighbors with mammoths. You will have an opportunity to see these beautiful animals in their natural habitat, but from a safe distance. As despite the program of their population recovery, these animals have never been domesticated.

After breakfast in the chum, you will be transferred back to Salekhard by TREСOL all-terrain vehicle (7-10 hours, depending on the state of the road and weather conditions). A picnic lunch will be arranged on the route. Upon arrival to Salekhard, you will be accommodated in a hotel, and have dinner in a local cafe in the evening.

After breakfast at the hotel, you will be transferred to the Salekhard airport.

On Days 1 and 7 you will stay in the Arktika Hotel 3*, located in the center of Salekhard. You will be accommodated in standard double rooms. Each of them will have two single beds, bedside tables, closet, desk, coffee table, chairs, flat-screen TV and a private bathroom. There is a restaurant on site.

On days 2-6, you will stay in a chum – reindeer herders’ tent. The chum is heated by a stove, there is a sink inside and an outdoor toilet. You will sleep on beds made of reindeer skins in sleeping bags. Sleeping areas for men and women in the tent are divided by canopies. There is a generator in the chum for lighting and for you to charge equipment. There are no showers in the camp.

Please note that at night the oven in the tent is not heated, so you need to have warm sleeping bags with you (rated for extreme temperatures of -30°C), or you can rent them on the spot.

Who will be my guide +

Experienced guides will work with you throughout the tour: a tour guide and a qualified instructor guide.

The cost of the tour includes full meal service (except the breakfast in Salekhard on Day 1). At the chum, you will be served national cuisine.

What transport is used on the route +

You will travel in comfortable vans in Salekhard and on TRECOL all-terrain vehicles all over the program. Snowmobiles and reindeer sleds are also used in this tour.

What to bring with me +

In February and March, the temperature in Yamal ranges from -5 to -30 °C. It often snows, and there is also often clear sunny weather. You need to be prepared for the extreme cold and take appropriate clothing.

The cost for groups of 2 and more people +

We can organize this program for your group of 2 or more on any other date. The cost will depend on the size of the group:

Hard. Professional training and perfect physical fitness are required. The level involves climbing to the tops of the mountains (above 3000 meters), freeriding and North Pole diving.
Age
from 16 y.o.
Group size
to 5 person
Duration
8 days

Expedition to the Pole of Cold

The land of reindeers and walruses

Expedition to the Polar Urals